Dreams has been out on PlayStation 4 for about a month, which is more than enough time to let the aspiring game designers out there upload some projects. The dreamiverse can be a little overwhelming, to be honest. There’s not really a great way to search by author or theme, despite the tag system.

In our experience, the best way to roam the dreamiverse is to just dive right in and try random things. You’ll wade through a lot of garbage, but to be honest, with a few friends joining you garbage can be a lot of fun. If you really need some guidance, though, then here are our recommendations for some neat Dreams to check out.

We’ll start with one that, frankly, we wish we thought of. Push Square reviewed Dreams within Dreams itself, and it’s an interesting piece of experimental game journalism. Their little walkthrough lets you experience firsthand everything they talk about in their review. Frankly, it would be great if we could do this with every game we review. “The controls feel loose” means a lot more if you can just try out the controls. This probably won’t become the way we review AAA games anytime soon, but we do applaud Push Square for trying something new and really making it work.

We did our best to try a number of games from completely different genres in this list, and some of our personal biases definitely crept through. As fans of the shmup genre, we have to say that D-Darius really feels like a full production. While the UI could use a facelift, the mechanics are spot on. You fly your ship, upgrade multiple weapons, and take on numerous huge bosses while dodging a rain of bullets coming your way. It’s exactly what a shmup fan wants.

Speaking of genres, Prometheus isn’t really a full game as much as it is a proof-of-concept, but what a proof-of-concept it is. Not only does it show that full FPS physics and mechanics can be built in Dreams from the ground up, it also showcases some truly spectacular level design. You have a few different guns to play around with and a few different enemies to shoot, and it’s clear that Rothniel will need to add a lot more if this is ever going to become a full game, but it’s still really impressive how complete, stable, and polished this demo experience feels.

One of the most simple ways to get your start in game design is to remake something that inspired you, and it looks like P.T. inspired a lot of people, despite the fact that Konami will never make it happen and Kojima has moved on to Death Stranding and other projects. P.T. is one of the most remade games in the dreamiverse, and this version is by far one of the most complete. The looping gameplay is there, the jumpscares are there, the ambiguous sound clips are there, it’s a blast from the past really. Sure, it doesn’t look nearly as refined as the original does, but it plays almost the same, and more importantly it brings up an interesting thought experiment. Could games like Dreams aid us in video game preservation? Like a group of scientists cloning a Wooly Mammoth from fossil DNA, could we take the discontinued games of old and give them a second life by remaking them in popular platforms?

Speaking of personal biases, Bushido Blade was an awesome fighting game and if you haven’t played it you missed one of the high points of the early PlayStation. The series has been long dead, but TonyVilsept has brought it back with this proof-of-concept. Don’t get us wrong, it’s nowhere near a full game at this point, but it does show promise, and if anyone does make a full Bushido Blade remake, complete with the one strike kills and stealth elements, then we might just spend all of our time in Dreams honing our skill with a katana.

Now, there is a rule of the internet that reads like this: If it exists, then there is Sonic the Hedgehog fanfiction of it. So, of course, we weren’t surprised that every third upload to Dreams was some sort of Sonic game. Here’s the thing though, they are pretty good. Due to Dreams’ content sharing system, only one designer ever has to nail the physics and everyone else can focus on level design. That’s why dreams like this, a sort of Sonic Adventure remix, are so interesting, because they can integrate stuff like modern day boost based gameplay. Honestly, this is just the tip of the iceberg. Just type Sonic into the Dreams search engine, and you’ll have enough Sonic content to keep you playing for years.

It’s fairly clear that Dreams is meant specifically to build 3D games. So it’s always interesting when a dreamer manages to make a working and visually interesting 2D game in the engine. Of course, one of the best 2D games to play around with is Tetris as it’s a fairly easy game to code. That being said, this version of Tetris is fairly well implemented, with full bag mechanics, a massive preview window, a hold mechanics, and more. Now if only one can remake Tetris Battle Gaiden in Dreams.

Speaking of 2D games, j_plusb’s Wildfire does more than just create a game that plays from a 2D vantage point. It effectively tries to recreate a sprite engine inside Dreams’ 3D engine. The game itself is pretty standard: run, light things on fire, jump, but the sprite environments and neat parallax scrolling that takes advantage of 3D space is something worth checking this game out for, and possibly even importing its assets into your own game.

One more biased entry. We have been fans of the tower defense genre ever since people were making them in Starcraft and Warcraft III map editors. Nowadays they are usually relegated to mobile and browser games, so it’s really nice to see a tower defense game make its way into Dreams. Once again this is a work in progress, but with a little polish and some expanded mechanics, we could see this getting pretty big.

We saved this one for last because it’s honestly one of the most complete and interesting games in Dreams right now. The models are great. The mechanics are deep. It has full multiplayer capabilities. Frankly, it plays like a full indie release. You’ll have to invest some time in this one if you want to check it out, but it’s a fantastic showcase of just how powerful Dreams is.

What are some of your favorite dreams? Let us know in the comments. 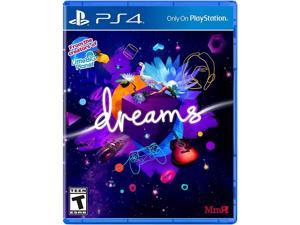 News
Feb 21, 2020
I’m just going to come out and say it, we have some screwed up notions of ownership in the video game industry. Now I’m not a lawyer so take...

The Dreams beta launch has been a bit of a disaster

News
Jan 17, 2019
I’ve been intrigued by Media Molecule’s upcoming creation game Dreams for quite some time, so naturally I was excited when the studio announced what...

Preview: Dreams is the most ambitious make-your-own-game engine ever, but will that be enough?

News
Mar 24, 2018
Games that give you the tools to create your own original games within their framework form a strange and polarizing genre. While a certain breed of...