Review: Yakuza: Like a Dragon is brilliantly stupid and stupidly brilliant

Sometimes it’s refreshing when a game takes a step back and winks at the camera. That’s exactly what Yakuza: Like a Dragon is doing. It knows that the Yakuza series is a fairly goofy open-world romp whose crime family based plot is just a poorly veiled excuse to do a million side quests from drinking, to bowling, to singing karaoke. Like a Dragon asks, “what if we took that formula and made it a JRPG, a super self-aware JRPG that just wants to have fun with its premise?”

The answer? You get one heck of a good time.

If you are only a casual fan of the Yakuza series, you are in luck. Like a Dragon takes place in a semi-new setting, with a new cast of characters, and builds its plot from the ground up. There are certainly references you’ll miss if you aren’t a die-hard fan, but this is a fairly decent jumping on point if the action-based gameplay of previous titles wasn’t your jam.

You play as Ichiban Kasuga, a guy who fashions himself a hero so much his name literally means “number one.” As opposed to Kazuma Kiryu, the previous Yakuza protagonist who has a bit of a darker stoic nature, Ichiban is a goof. He essentially considers himself a JRPG protagonist, primarily due to playing too many hours of Dragon Quest (no really, that’s the real reason, and they really drop the franchise name). As a result, he dedicates himself to loyalty and justice, despite being an enforcer for the mob. He wears his emotions on his sleeve and talks in clichés and, more importantly, he sees the world as a series of turn-based battles and sidequests because “it just makes him fight harder.”

Yes, that’s the reason why the game has so many JRPG mechanics. Once again, Like a Dragon is turning to the camera and winking.

Ichiban is a fantastic protagonist because… well… he’s a nerd, a big lovable nerd who might just also smash you over the head with a bicycle and powerbomb you into the pavement. You want to root for him, partially because his JRPG aesthetic is so out of place in a more realistic portrayal of Japan. But that’s what makes it so fun! Bats wrapped in chain take the place of legendary swords, dirty fighting techniques take the place of magic spells, healing items are just rice balls and booze, and that’s all because that’s the way that Ichi looks at them.

As far as the rest of the story goes, it’s another wacky Yakuza tale of betrayals, conspiracies, and ancient family grudges. It is a compelling plot, but it thankfully never takes itself too seriously. It’s not afraid to get dark, but even the dark moments are thrown at you with a wink and a nod suggesting that you already kind of know what Yakuza is going to throw at you. Sometimes it makes a statement, but even when it is, it’s looking to maximize the amount of time you have a goofy smile on your face because you just suplexed someone off a bridge or played a big game of can-recycling Pac-Man.

The battle system is absolutely the highlight of the game. Yes, it is a turn-based system, which means picking attacks and targeting the enemy from menus. But Ichi is an RPG nerd which means there are tons of systems here that are reminiscent of some of the best RPGs of all time.

You can knock enemies down, like Persona for example. For the most part, normal attacks don’t do much compared to your skills but use a normal attack on a knocked-down enemy and you’ll make an opportunity attack that does extra damage. There’s also an extensive social stat system, also reminiscent of Persona which gives you advantages in and out of battle.

Attacks are context-sensitive, like some of the more modern Final Fantasy series. Enemies and allies are in constant motion, and being near a bike rack might turn a simple strike into a massive beat down with a two-wheeled bludgeoning weapon.

There are a ton of jobs and skills to invest in, like Bravely Default and this can lead to combo attacks, like Chrono Trigger. There are timing mini-games that can increase or reduce damage, like the Mario RPG series. Enemies can interrupt you if you don’t take their positioning into consideration, like Valkyria Chronicles. There’s even a complex system of strength, weaknesses, and status effects, which feels inspired by RPG Maker games like Jimmy and the Pulsating Mass.

The whole battle system is a love-letter to JRPGs while simultaneously being a love-letter to the Yakuza series. Every character you come across is almost a parody of themselves, and that’s on purpose. Even basic street thugs act more like goblins in a JRPG than they do people. Everyone has special techniques, from street flashers that stun you to tech specialists that have barriers that are barely explained. Heck, at one point you’ll fight a crane. I didn’t even know I wanted to punch a crane to death before this and now I wanna do it again!

And, of course, it wouldn’t be a Yakuza game without sidequests. Tons of shops to visit? Got that. Batting Cages. Got that. The literal, full version of Virtua Fighter 5: Final Showdown? Got that too. In fact, all of its arcades include true to life, full versions of other games from Outrun to Space Harrier. Then there a casino full of card games, slots, and pachinko, karaoke, a full vocational school sidequest that lets you upgrade your stats via trivia, a property management game that works like a sim, a Mario Kart rip-off with a Yakuza coat of paint, and so much more. It really is like you are buying multiple games in one.

The only problem is that these side-quests aren’t really mandatory. If you mainline the plot without taking the time to stop and smell the roses, you’ll eventually hit a pretty steep difficulty wall. You can, of course, grind your way through it, but it will take forever. Like a Dragon wants you to waste time having fun, and rewards you with stats, skills, and items for it. If this doesn’t appeal to you, you might feel like the later parts of the game are a bit of a slog.

Everything is wrapped together with a stellar presentation. The graphics are fantastic and are only enhanced with a strong PC, or when played on a next-generation console like the Xbox Series X. The dub is really good, combining natural English dialogue with some hard to translate Japanese words that are important to the culture, similar to the Persona series. The music is great, and every battle theme is a real bop. It’s just very solid all around.

For a Yakuza reputation is everything…

But the biggest value in Yakuza: Like a Dragon, is the fun. This is a game that is just having fun. It is having fun with its characters, and its setting, and its mini-games, and it’s combat. It loves putting you in situations that give you a rush of adrenaline and dopamine because of how absurd and awesome they are. It’s not really looking to be the next big arthouse RPG or to compete with stuff like FF7R, or even to really satisfy fans of the original Yakuza franchise. It wasn’t to start fresh and that fresh start is a damn compelling JRPG about a gangster with a heart of gold. 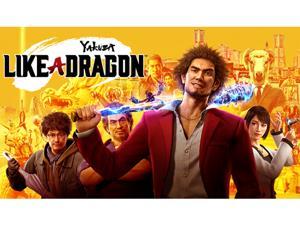 9.25 Yakuza: Like a Dragon is worth your time. While you might not like it if you were a fan of the older Yakuza titles, or if you are looking for something dark and serious, anyone who just wants to explore Japan while having some fun and beating some gangster’s faces in old school JRPG style will love this title.
9

It has a compelling combat system, a compelling job system, a huge world to wander around. Aside from a bit of a wonky experience curve, it’s just fantastic.

Perfect graphics that just get better on next-gen hardware, with a great dub and kicking soundtrack.

I would like to repeat, this includes the FULL VERSION OF VIRTUA FIGHTER 5 FINAL SHOWDOWN as a mini-game that you can play whenever you want. This is one of the only games I know whose mini-games are full games!

It’s just a damn fun title. There’s no other way to put it. You know those games that put a smile on your face from start to finish? This is one of them.