Review: StarCraft II: Legacy of the Void is a fun, action-packed finale

With StarCraft II's third and final expansion, the Protoss-themed Legacy of the Void, developer Blizzard closes out a dynasty which began five years ago when the game's first part, StarCraft II: Wings of Liberty, launched in 2010. As you might imagine, Legacy of the Void acts as a culmination of all the events and teases which were shown in both Wings of Liberty and the 2013 second act Heart of the Swarm, leading into a final climactic showdown with a big baddie who hates the Terran, Zerg and Protoss in equal measure. Legacy of the Void also builds upon the series' finely-tuned multiplayer, and even adds in a fun new co-op mode for those who prefer fighting AI over real opponents. In short, those who have invested in StarCraft II since the beginning won't be disappointed by what Legacy of the Void has to offer.

Legacy of the Void's story campaign wastes no time in cranking the action dial up to eleven. With their home world of Auir overrun by Zerg, the valiant Protoss, led by their stalwart leader Artanis, must gather whatever resources and allies that they can in order to face down the dark Xel'Naga god Amon, a being which seeks to eradicate all life as part of a twisted plan to “purify” the universe and start anew. Operating from a massive Protoss starship called the Spear of Adun, players can progress through the campaign's missions in a somewhat non-structured format, similar to how the campaigns progressed in both Wings of Liberty and Heart of the Swarm.

Completing bonus objectives in each mission awards Solarite, a precious resource which can be used to upgrade the Spear of Adun and unlock new powers which can be used to gain a tactical advantage in each mission. For more casual players who don't want to stress about using active abilities (or more hardcore players who may see them as an unnecessary crutch), Solarite can also be diverted to the Spear of Adun's auxiliary systems, increasing the amount of resources you begin each mission with or lowering the amount of time required to construct new buildings. The Solarite allocation system isn't terribly deep, but it does add an interesting Protoss-flavored wrinkle to the campaign, in much the same way as the Kerrigan upgrades from Heart of the Swarm.

As for the missions themselves, Blizzard did an excellent job of making them feel strategically engaging as both direct combat scenarios and as environmental puzzles, even when playing on the super-easy Casual difficulty level. From securing precious Vespene Gas fissures in a map where Vespene is severely limited, to holding out as long as you can against an endless tide of Amon-corrupted Zerg in order to secure a valuable Solarite cache, Legacy of the Void's missions are always challenging the player to think in new and creative ways. Even better, the units you unlock by completing missions can be customized with three different “variants” (representing the three different Protoss factions you bring under your command), each of which can allow for drastically different playstyles and strategies.

My one major complaint about the story campaign is that it doesn't do a good job of explaining where Amon came from and why the Protoss care so much about retaking Auir and eradicating Amon for good. Of course, this isn't really Blizzard's fault, since, ideally, those who are playing Legacy of the Void have already played through the two games that proceeded it. Though, even those who have played through Wings of Liberty and Heart of the Swarm might still be confused, if only because of the complex and confusing nature of the game's lore-heavy narrative. Still, if you can get past all of the confusing names and terminology being thrown at you, the story campaign will not disappoint if you're a fan of strategy games.

If StarCraft II's fast-paced, micromanagement-focused competitive multiplayer component is more your jam, you'll be happy to hear that Legacy of the Void has made it feel more fine-tuned than ever. It is sadly still not very accessible for more casual players (the learning curve is as steep as it has ever been), but Blizzard has implemented several tweaks to make a typical competitive match both more fun to play and more fun to watch.

Matches progress much more quickly now since the number of worker units you begin with has been doubled from six to twelve, and macro abilities such as the Protoss' Chrono Boost can now be “tagged” to specific buildings in order to automatically refresh the ability with no further input from the player. With these new tweaks, the inherent tension found in every competitive match feels more palpable than ever, do you try to bum-rush your opponent with an opening-minutes gambit? Or do you play more defensively and pray your resource management skills are superior?

Fortunately, some of the pressure can be taken off by playing Legacy of the Void's brand new Archon mode, which allows two players to simultaneously manage a single base. As someone whose competitive skills are a bit lacking, I found Archon mode to be a very welcome addition, since I could focus on simpler tasks like scouting the map and constructing new buildings while my teammate handled unit-building and upgrades. If you aren't a very good competitive StarCraft II player but you want to get better, Archon mode is also a very handy way to do so without smashing your head against solo-queue matches, since you can be paired up with an expert player who will show you the ropes and guide you to (hopefully) victory.

In addition to Archon Mode, Legacy of the Void, also adds in a dedicated co-op mode in which two players each take control of a “Commander” (iconic characters from the StarCraft series including Artanis, Kerrigan and Jim Raynor) and team up to battle against AI forces in various scenarios. The co-op mode does have its own progression system in which you can earn XP and unlock new Commander abilities, but the progression is sadly completely separate from the competitive component's more fleshed out progression system. Still, if you're looking for something else to do after beating the story campaign but you don't want to throw yourself into the competitive fires just yet, the co-op mode serves as a worthy go-between.

Of Endings And Beginnings

Oddly enough, Legacy of the Void feels more like the beginning of something new rather than the end of a story which began back in 2010. The story campaign does a good job of wrapping up all of its major plot points (while leaving the door slightly open for future adventures), but we already know that this is far from the end of the line for StarCraft as a whole, especially since Blizzard likely has plans to support Legacy of the Void for the foreseeable future. Legacy of the Void may not be the best point to jump into the series as a fresh-faced newbie, but if you're a StarCraft veteran looking for more challenges to overcome, the third and final entry in the StarCraft II series will not disappoint. 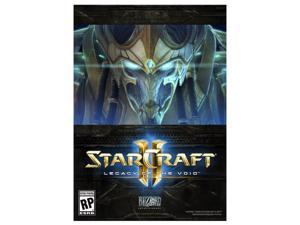 8.50 It isn't perfect, but StarCraft II: Legacy of the Void allows the series to end on a high note, offering a comprehensive experience which should make every type of RTS player happy.
9

The admittedly small sprites used for units are made up for by impressive environmental effects, be they shifts in the map's layout, ambient flora and fauna, or good old fashioned explosions.

Legacy of the Void doesn't make any great strides when it comes to the story campaign, but there's still plenty of new content to mess around with no matter your preferred mode.

There's a lot of names and terminology thrown around that you probably won't understand if you're not a die-hard fan of the series, but everything from the voice acting to the ambient audio effects is top notch as usual.

The skill curve for competitive multiplayer is no less steep than it was in past games, but new gameplay tweaks and fun additions like Archon mode and co-op make this the most accessible StarCraft game to date.