Rocket Arena has been through a lot in its short time in the public spotlight. When developer Final Strike Games unveiled it in 2019, it was a free-to-play, first-person multiplayer shooter with Nexon as its publisher. But since that time, the studio found a new publishing partner (ending up with EA), switched the game to a third-person view, and decided to price it at $30.

From the outside, it’s tempting to think that those sudden changes might lead to Rocket Arena being a bad game. In this case, the answer is a little complicated. Rocket Arena’s frantic 3-on-3 battles and growing roster of unique characters (11 as of this writing) is a refreshing change of pace from the current crop of multiplayer shooters.

But it’s also hard to see why this is a premium game at all.

If you’ve been playing a lot of Call of Duty: Warzone like me, it’ll take some time to acclimate to Rocket Arena’s movement system. None of the heroes are particularly quick, but they all can do double or triple jumps -- as well as “rocket jumps” (shooting down at your feet to launch yourself into the air) -- to scale various obstacles. But instead of falling from a jump, characters gradually float to the ground. It sometimes feels as if you’re fighting in a huge anti-gravity chamber.

These restrictions are frustrating at first, but it makes sense: If players could easily jump out of the way of fire, no one would be able to win a match. However, you do have a dodge ability that allows you to harmlessly pass through a barrage of rockets — but the catch is it’s on a six-second cooldown. Thus, the best way to avoid taking damage is less about fast reflexes and more about timing your dodges.

The weapons also work differently than in other shooters. Each hero has a rocket launcher or rocket-like weapon, and while some shoot straight at your opponent, others ricochet and bounce off walls, or fire in an arc. On top of that, characters have special abilities that can significantly affect the course of a match. Unlike Overwatch, these powers don’t pigeonhole them into specific classes; who you choose to play as is more a matter of personal preference.

But you can customize your heroes with items known as Artifacts. When equipped, Artifacts can boost your rocket damage, reduce cooldowns, or affect other stats. Each character can hold up to three items at a time.

That’s a lot of information to digest, but Rocket Arena does a good job of easing you into these mechanics. It took me a couple of matches to get used to the rhythm of the floaty combat, but once I found a few heroes I liked, it started to click into place. Rocket Arena is at its best when you’re locked in a heated 1-on-1 battle with an opponent, trading off well-placed shots and dodges as you fly through the map. It feels as if you’re both part of a bizarre ballet performance, and the first person who makes a mistake is the one who loses.

A different kind of rocket league

If your team is on the losing end of those encounters, the quick match times (usually less than 10 minutes) make it easy to jump back into another game. That’s true for all of Rocket Arena’s modes. Knockout is your standard team deathmatch. Mega Rocket involves capturing specific territories. Rocketball is a Rocket League-style game where players rack up points by tossing a giant ball into each other’s goals. Treasure Hunt is about capturing treasure chests and coins. And RocketBot Attack is the sole cooperative mode, where three players face-off against AI-controlled robots.

These modes initially offer a good amount of variety, but I burned out on most of them after a few hours. RocketBot Attack is little more than a glorified practice mode due to uninteresting AI behavior. Collecting coins in Treasure Hunt wasn’t very enjoyable. And while Knockout and Mega Rocket were OK, my favorite by far was Rocketball. There’s something inherently fun about bouncing around the map and passing the ball to your teammates. It’s like basketball, but with 100 percent more bombs and explosions.

Rocketball was also the only mode that pushed me to play as different heroes because I wanted to see how their powers affected the game. Take Amphora’s Hydro Form, for example. It transforms her into a puddle of water that can then launch other players into the air with a powerful cyclone. It’s fine for dealing slight damage or pushing enemies from an objective.

But in Rocketball, you can use the cyclone to knock the ball away, launch a teammate into the air to set them up for a faraway shot, or use it as a faster way of traveling to the ball. More than the other modes, Rocketball illustrates just how goofy and chaotic Rocket Arena can be.

Not much to fight for

Each hero has a progression tree that maxes out at 100 levels, giving you the chance to unlock Rocket Parts (an in-game currency), cosmetics, and character-specific costumes the more you use them. Additionally, for a separate purchase of $9.50 or 950 Rocket Fuel (the premium currency), you can earn rewards through the battle pass (known here as a Blast Pass).

I didn’t find either option all that great. Rocket Parts make up the bulk of the rewards in the character trees, and you can use it to buy costumes, different contrails for your hero, or new decorations for your totem (a fancy flag stand). The rewards in the free portion of the season one Blast Pass were equally underwhelming, consisting of minor cosmetics and Rocket Fuel.

If you don’t pony up for the premium battle pass, Rocket Arena constantly reminds you of all the costumes and cosmetics you’re missing out on whenever you level up. Considering that this is a paid game, I was a bit annoyed at this not-so-subtle upsell. But then I realized I don’t really care about most of the characters.

Final Strike Games seems to be going for a Saturday morning cartoon vibe, and while that works well with the map designs (which feature some fun locales and climates), the heroes are another story. Some, like the jetpack-wearing Topnotch and the sorceress Mysteen, actually look kind of cool! But others -- such as Jayto, Plink, and Amphora -- look like generic characters from a long-forgotten Disney Channel show.

The off-putting art style is unfortunate because it overshadows the otherwise great gameplay. Rocket Arena’s core mechanics are solid, and there’s a lot to dig into if you start branching out to the different characters and learning their power sets. I just wish Final Strike gave me more compelling reasons to stick around. Between the sparse mode selection and weak progression rewards, I felt like I had my fill after about a dozen hours of playing.

It’s worth noting that the developer plans on updating Rocket Arena with new seasons of content, including additional characters and modes for free. So in theory, it should be a more robust offering in a few months’ time. But as it is, there’s not much here to chew on for $30. 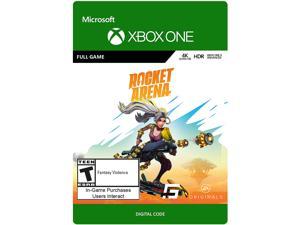 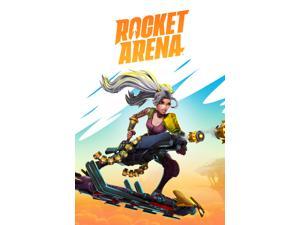 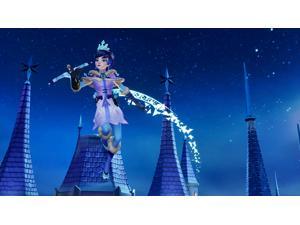 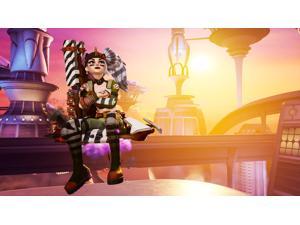 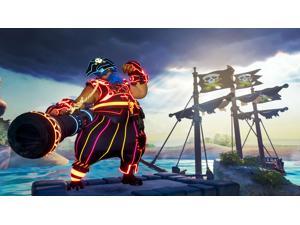 The rocket-based movement and attacks are genuinely fun once you get used to it. You can spend a lot of time just experimenting with the heroes and customizing their Artifacts.

The slate of multiplayer modes feel a little thin. Two of them are total duds for me, and the only reason I kept playing was because of Rocketball.

Rocket Arena is clearly trying to appeal to a broad audience with its cartoon-like art style, but the quality is inconsistent at best. I didn’t care for most of the costumes I was unlocking.

Final Strike isn’t the first studio to struggle with creating decent battle pass rewards, but the season one Blast Pass was a letdown, at least for “free” players. Here’s hoping it gets better in future seasons.