Name a better duo than Razer and gaming keyboards. The BlackWidow (and its many variants) has been an icon in the PC peripheral space since time immemorial, or at least for a really long time. It was one of the very first gaming keyboards that widely stuck in the market space, and it set a lot of precedents for what gamers would go on to like in their keyboards—RGBs, clicky-clacky mechanical keys, and that’s pretty much it.

Since those days, Razer has been at the forefront of the space attempting to innovate at every turn. For the most part, the BlackWidow has remained incredibly popular, but Razer is trying something brand new out now with a keyboard called the Huntsman Mini. The full-sized Huntsman has been around for a while now, but the Mini is brand new, and as there aren’t many widely-marketed small form factor keyboards out there for gamers specifically, this tiny, tenkeyless machine is a big deal.

As soon as you know it’s a “mini” keyboard, some expectations are set right away. For starters, it is tenkeyless, which means no number pad, but being mini means that the keyboard is limited even further in terms of actual keys. No arrow keys, no function (F4, F5, etc) keys, no print screen, no delete, and the list goes on. Most of those keys are imposed on standard letter keys as secondary functions, which means, for example, you can still hit “arrow right” if you hold down the Function button and hit the L key.

This is pretty standard for a mini keyboard, but it’s also the one and only obvious shortcoming of the Huntsman Mini. For all intents and purposes, it works like a standard mini keyboard. The keys feel smooth and responsive, it takes up as little desk real estate as it possibly could, and on those counts, it’s an impressive device that fits a niche in the market that hasn’t really been explored. Because it hasn’t been explored much, though, some semi-obvious kinks still need to be worked out.

Keyboard RGBs caught on with gamers so quickly for two reasons. First, yes, RGBs are cool. But the second function of these RGBs is to, well, illuminate the keyboard. You see, gamers tend to be night owls, compared to the average populace, and having a keyboard that itself is a light means that they don’t need a desk lamp to see what keys they’re pressing.

This keyboard has RGBs, so it serves that goal, too. But the secondary functions of each key (those arrow keys, function keys, and so on) don’t light up with the rest of the key. So if you’re playing at night or in the dark, you can’t see them, which normally isn’t a problem, but situationally, it can be a big problem. Easily fixed in future iterations if Razer simply makes the secondary functions on each key light up with the rest of the key.

Fortunately, the rest of the keyboard is very impressive and particularly well-designed.

It’s hard to think of the word “features” with a mini keyboard and not immediately think of how well the keyboard blends secondary functions with its standard use, but the Huntsman Mini does actually have a variety of useful bonuses.

For example, the Huntsman Mini takes advantage of Razer’s trademarked mechanical switches, giving you the option of either using Razer Clicky Optical Switches or Improved Razer Linear Optical Switches. We were able to try out both, and each one felt incredibly snappy and responsive. You can compare the feel of each to standard Cherry MX Blue switch or a Cherry MX Black switch respectively, but a bit more fine-tuned for Razer products.

I’m more of a Linear switch guy myself, so I prefer the Razer Linears, but the Clicky Optical Switch is a solid choice, especially for a teeny tiny little contender like the Huntsman Mini. It’s a lot of click for such a small package. Each key is also extra durable and even textured, to make each key press feel satisfying.

Like any modern Razer peripheral, this keyboard also comes with a suite of lighting presets and onboard memory for storing them. Switching between new lighting effects is swift and easy, so you can change up what you need to match your desk’s aesthetic. That’s all pretty par for the course with a modern gaming keyboard, and the Huntsman Mini doesn’t sacrifice any of it despite its compact size.

Overall, the Huntsman is a very solid keyboard with only one major issue. If you’re looking for a gaming keyboard that also matches a minimalist desk setup, there aren’t many better options. 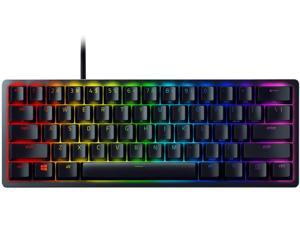 8.50 The Huntsman Mini is as good a gaming keyboard as you can find, with a snappy, comfortable design and decent features. It has its shortcomings, but on the whole, it’s an above-par keyboard that serves as a great starting point for mini keyboards in the gaming market. If you’re looking to shift to your desk to a minimalist, small form factor focus, this is a great option.
6

The Huntsman’s design is solid, if not innovative, but is also marred by the keyboard’s one significant flaw.

Despite it’s smaller size, the Huntsman Mini doesn’t sacrifice any standard gaming RGB keyboard features, and packs in some bonuses.

Nothing pops out as extraordinary, but the keyboard runs as you’d expect, with no visible hiccups or shortcomings. Key presses are very quick and responsive.