Review: Mega Man 11 is a triumphant return to form

Mega Man fans were never asking for much. The Mega Man formula has been pretty well established at this point. Blue robot, eight robot masters, Dr. Wily in a skull shaped tank, go. We never wanted the greatest Mega Man game of all time. We just wanted to see the Blue Bomber make a return worthy of what the franchise had already established.

Even with those fairly low expectations, if you said Mega Man 11 was the best Mega Man game of all time, I’d say you’d at least have a compelling argument on your hands. Capcom went above and beyond the call of duty here, making not only a Mega Man game that succeeds in pleasing the hardcore classic Mega Man fanbase, but also a game that manages to bring Mega Man into the modern age without sacrificing his identity.

A tale of two scientists

Mega Man 11 begins with a flashback.

Dr. Wily and Dr. Light are still in college, arguing for funding for their respective projects. Light is developing the technology needed to allow robots to think and feel like human beings, allowing them to make decisions independent of us. Wily believes the key to robot greatness is his newly developed Double Gear system, which would allow robots to become super strong or super-fast at the expense of physically degrading their body. The committee eventually decides to back Light’s research instead of Wily’s and Wily walks off in a huff, presumably to grow that amazing moustache and paint skulls on everything.

Flash forward to present day, and Wily remembers (after 10 games) the Double Gear system, and the reason why he and Light ended up coming into conflict in the first place. After unearthing the research, he uses it to upgrade his own flying saucer, and then uses his super speed to kidnap eight of Dr. Light’s new robot designs and… try and take over the world I guess. Dr. Light decides that Mega Man is in no condition to fight these supercharged robots, so he installs the prototype Double Gear system into Mega Man to give him a fighting chance.

Mega Man games were never praised for their story, but Mega Man 11 does a decent job. The overall plot is actually pretty interesting. Wily is still a cartoonish villain, but framing his research as important while simultaneously framing Light as a bullish and stubborn colleague that refused to hear him out adds a dimension of moral greyness to their rivalry that the series never had before.

The voice acting is also great, which is a rarity in Mega Man games. The actors take their roles seriously while still giving every character a Saturday morning cartoon style of whimsy.

You won’t be shedding any tears for dead robots here, but the plot will keep you smiling until you fire your last shot, which is really all we could have asked for.

The Double Gear system takes center stage in the plot, but also in the gameplay. It’s really the only new gameplay mechanic to speak of. By pressing one of the shoulder buttons, Mega Man can activate either the Power Gear or Speed Gear. The Power Gear allows him to charge his Mega Buster up to higher levels and to use upgraded versions of enemy weapons. The Speed Gear slows down his perception of time, allowing him to dodge bullets and make nearly impossible jumps.

Hardcore Mega Man purists will start Mega Man 11 by ignoring this new system, and they will very quickly find their way hitting a brick wall. Stages are designed with the Double Gear system in mind. You’ll very frequently come across lightning fast platforming puzzles that are impossible to complete, until you realize they are child’s play with the Speed Gear. You’ll also come across enemies that seem to take a million shots to take down, unless you hit them with one fully charged Power Gear shot. These areas of the game aren’t too frequent, but they appear often enough to make you begin to take notice of the game’s new mechanics.

Once you do start to take notice of these systems, you begin to use them in interesting ways. For example, you might realize that you can quickly switch the Speed Gear on and off to get many of the same bonuses without pushing yourself to overheating. You may notice that there is a sort of “hidden” charge level to the Power Gear that requires you to charge for an extra-long time. You might even start purposefully taking damage so that you can activate the last ditch Double Gear, a maneuver that activates both gears at the same time but forces you to overheat and become vulnerable after it ends.

Everything aside from the Double Gear system is basically classic Mega Man. Run, jump, shoot, slide, and call Rush every so often. You know the drill.

It’s certainly familiar, but there are a few quality of life improvements to the formula. Rush is now mapped to a face button, allowing you to call him at any time. This allows you to use him in the heat of battle which is something you really couldn’t do in other titles.

Weapon switching is now mapped to the right control stick. By pressing it in a direction (specifically the direction of the robot master who you got it from on the stage select screen) you will immediately switch to your weapon of choice. This makes it easy to switch to your preferred weapon on the fly, and is going to make speedruns of this game a blast to watch.

Speaking of weapons, Mega Man 11 has some of the best weapon design the franchise has ever seen. Each and every weapon is super powerful and super useful, and I frequently found myself using four or more weapons during stages and more than one weapon during boss fights, regardless of the fact that bosses are still only weak to one.

Then there’s the shop. Auto returns, willing to trade bolts for upgrades, except the upgrades are pretty broken this time around. You can buy extra lives and e-tanks, as well as upgrades that save you from spikes or bottomless pits. However, you can also buy upgrades that cause weapon pickups to restore energy to all weapons, upgrades that reduce your damage, upgrades that let you move at normal speed during the Speed Gear, and even upgrades that give you rewards for speedrunning the game.

In a way, the shop can be used as a sort of difficulty modulator. Even if you can’t make your way through a single stage, you can eventually buy enough E tanks, beat calls, and upgrades to brute force your way through it. This goes a long way toward combatting the frustration you would usually feel from a challenging stage section.

However, Mega Man 11 also has difficulty levels that you can pick from on the main menu as well. These difficulty levels don’t just change the amount of damage you take and do, and how much upgrades cost, they also change the layout of some stages and the behavior of some enemies. The difference in experience between playing this game on Newcomer, and playing it on Hard is night and day. It almost feels like a completely new game, and to be honest this makes you want to replay Mega Man 11 again and again to experience everything that each difficulty level has to offer. This is a good thing because you can beat a run of Mega Man 11 in a day or so, so the replay value is appreciated.

Unfortunately, there is one place where Mega Man 11 doesn’t perform spectacularly, and that’s the controls. Mega Man just feels kind of sluggish and heavy, and though I haven’t conducted thorough experiments it kind of feels like he suffers from mild input lag. You can adjust after a while, but it’s a shame that a franchise known for its tight platforming feels unfortunately loose and inaccurate. Since Mega Man has access to the speed gear, this really doesn’t matter much as even the most difficult platforming segments become child’s play. It’s just a shame that this doesn’t play quite as tight as, say, Mega Man 9.

But that’s really the only flaw I can nitpick about Mega Man 11. Otherwise, it’s exactly what we all wanted: a brand new Mega Man game that innovates on the formula but doesn’t try to reinvent the wheel. The music is great, the robot master design is fantastic, the stages are fun to play, everything is in order here.

I think you already know if you are going to enjoy Mega Man 11. If you have enjoyed the Blue Bomber’s exploits in the past, then this is the game for you. This is the Mega Man that we all know, love, and remember, just with a few new tricks and a new paint job. 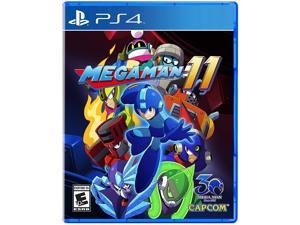 9.00 The Blue Bomber is back, and if you were ever a fan of his adventures, then you should pick Mega Man 11 up. It’s a solid entry in the Mega Man franchise, and it will make you remember why you fell in love with this super fighting robot all over again.
9

I enjoyed the gameplay of Mega Man 11 so much I played it back to back, four times, once on each difficulty level.

Mega Man controls a little bit worse than he has in previous entries, but not bad enough to ruin the experience.

The tunes in this game are so amazing. It’s as if someone took the chiptunes of classic Mega Man titles and updated them with a new retro-synth instrument set. This is, quite simply, the cartoony futurism of Mega Man distilled into soundtrack form.

The character designs are great, the models animate smoothly, and the game runs at a smooth 60FPS. No complaints here.

Review: Bloodstained: Curse of the Moon 2 is more classic...
Reviews
Jul 14, 2020
Platforms: PC (reviewed), PS4, Xbox One, Switch Konami has largely given up on the Castlevania franchise. After less than a year since its launch,...

Review: Neon Abyss is part Dead Cells, part Enter the...
Reviews
Jul 14, 2020
Platforms: Switch (reviewed), PS4, Xbox One, PC If you enjoy a good roguelike, then the past seven years have probably been a great time for you...