Review: Madden NFL 21 lurches its way past the first-down marker

Madden NFL 21 has the unique distinction of being the most unrealistic entry in the franchise’s history. No, it’s not because of outdated rosters, animations, or new team names. But when I first booted up the game, it was hard not to notice that Madden NFL 21 was missing one of the biggest sports stories of the year: the coronavirus, and how it’s permanently changed the way all sports are played.

But maybe that disconnect is a good thing. In developer EA’s idealized version of football, the pandemic doesn’t exist: stadiums are packed with boisterous fans, players aren’t subjected to daily COVID-19 tests, and you won’t find a single cloth mask anywhere. It’s like peering into a slice of reality that no longer exists. I found it somewhat comforting.

I’m far from a hardcore Madden fan -- the last version I sunk serious time into was Madden NFL 18 -- so if you’re looking for a detailed critique on player A.I. or a breakdown of the year-to-year changes in Ultimate Team, this isn’t the review for you. I just wanted a solid football game, and in that respect, Madden NFL 21 mostly delivers.

A Tale of Two Franchises

Let’s start off with the meat and potatoes of Madden: Franchise mode. This is where you manage your favorite team, level up players through drills and matchups, and try to take them as far as you can each season. It plays out the same way in this year’s game. As I do with every Madden I pick up, I chose the 49ers and tried to build off their historic Super Bowl run from last year. Even though I skipped the last two games, my muscle memory served me well and I was able to jump in without too many problems.

The big exception was getting used to the new Skill Stick feature, which shifts all of the ball carrier's moves (like spins and hurdles) to the right analog stick. You’re supposed to be able to chain your moves together by pushing the stick in different directions, but in my experience, it was only useful with elite players like Patrick Mahomes or cover star Lamar Jackson -- basically, anyone who’s ridiculously quick on the run.

You can also perform defensive pass rush moves using the same stick, and it felt much better there. Flicking the stick up to rip through an offensive lineman, or down to bull-rush through them, was intuitive and more satisfying than the old way of mashing face buttons.

If Franchise feels too impersonal, you can also try out Face of the Franchise: Rise to Fame, a story-based mode that originally debuted in Madden NFL 20. You create your own character and, starting from the high school level, make key decisions about their football career. It tries to combine the drama of Longshot (the story mode from Madden NFL 18 and 19) with the robustness of Franchise’s seasons and games, but it doesn’t execute in either category very well.

Face of the Franchise begins with a rivalry between your character and a star quarterback named Tommy Matthews (Ready Player One’s Tye Sheridan, who sounds bored out of his mind here). It works well enough, but I didn’t like how similar it was to Devin’s and Colt’s relationship from Longshot. And once you get to the NFL, the story comes to an abrupt stop: Matthews is practically nonexistent, and the cutscenes (which you see a lot of early on) are few and far between.

EA tries to keep the narrative going with different scenarios that appear during your NFL seasons, like forcing you to come back from an off-screen injury or making you play your division rival over and over to highlight the beef between both teams. Though flimsy, these themed seasons can be fun because they affect the stats of both you and your opponents (in the case of the injury storyline, your player’s stats dramatically decrease while you recover).

This open-ended approach is an odd follow-up for the tighter high school and college narrative that came before it. As a result, Face of the Franchise doesn’t have any interesting characters or satisfying arcs, and that’s disappointing.

Madden NFL 21’s other big new addition is The Yard, which differentiates itself from the rest of the game with its more arcade-like experience. In this 7-on-7 mode, the field is much shorter, there are no kicks, any player on your team can be the QB, and you can pass as much as you want behind the line of scrimmage. The Yard is the closest EA has come to creating an NFL Street-style game in over a decade, and it’s nice to see that the sillier side of football makes it to Madden.

The Yard is all about speed and trickery. You only have a few seconds to pass the ball before the other team can blitz you, and games can quickly turn into a mad scramble as you try to find open players down the field. The Yard’s anything-goes nature creates fun moments like seeing Rob Gronkowski throwing a deep ball, or a not-quite-nimble Aaron Rodgers trying to juke defenders. While you can tackle solo challenges against the CPU, The Yard shines best in online multiplayer, where players are already getting pretty creative with their laterals and passes.

Your reward for completing challenges and online games are new cosmetic items for a custom avatar you create in The Yard (this is different from your character in Face of the Franchise). These mostly consist of brightly colored skins for your football equipment. Earning special skins isn’t new to multiplayer games, but it’s funny to see that trend applied to ordinary items like jerseys and gloves. Adding to that strangeness is the fact that you can’t remove items like helmets and shoulder pads from your avatar; you can only change the way they look.

If EA really wanted to embrace this backyard style of football, shouldn’t we have the option to dress our player in regular clothes, too? That’s my main issue with The Yard: If you’re going for the arcade experience, you might as well go all the way. But as it is, The Yard is a promising addition to the series. I’d love to see even more creative freedom (in terms of both trick plays and cosmetics) in future iterations.

As much as I like The Yard, Madden NFL 21 feels a bit bloated with all its modes, some of which I’ll probably never touch again. For example, I’ve always been lukewarm on Ultimate Team, and this year’s incarnation didn’t change my mind -- it’s still a huge grind trying to earn card packs and assemble a highly rated team from scratch. Superstar KO is another casual take on football (online matches are shorter than in Exhibition or Franchise), but I don’t see myself spending too much time there, either.

Madden NFL 21 also has some rough technical issues. One bug I kept seeing would strip the football field of any hash marks and end zone logos, so it looked like I was playing on a giant slab of astroturf. Loading times were too long in almost every mode, but it was especially annoying in pick-up-and-play modes like The Yard and Superstar KO. And the facial and body animations in Face of the Franchise’s cutscenes were stiff and not very lifelike, a huge downgrade from what we saw in Longshot years ago.

At times, it felt like the game was buckling under the weight of all its modes and features. Yet in spite of that, I wouldn’t call Madden NFL 21 a bad game. The core football gameplay is still great, and I like some of the improvements that EA added here. Perhaps it’s because 2020 has been a terrible year all around, but I could use some normalcy right now, and seeing football the way it’s meant to be played is a small but welcome step in that direction. 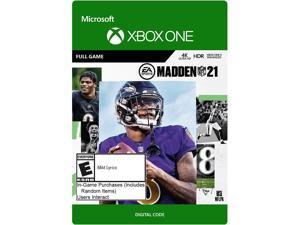 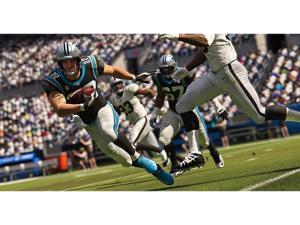 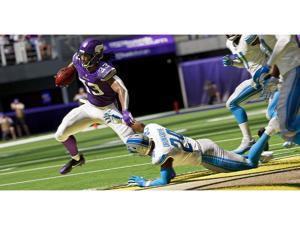 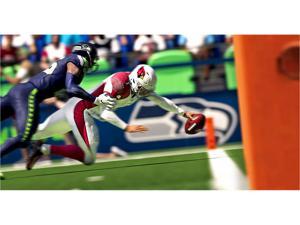 7.00 Madden NFL 21 is the clearest example yet of how unwieldy the series has become, so your en-joyment will vary depending on which modes best suit your play style. For me, that comes from seeing my virtual 49ers hoist the Vince Lombardi Trophy at the end of the season, so anything else on top of that is just a bonus.
8

While mostly unchanged, the football mechanics still work rather well. Putting offensive and de-fensive moves on the right analog stick was an inspired choice, and it makes playing on both sides of the ball a little more exciting.

Face of the Franchise’s cutscenes aren’t the greatest, but the rest of the game looks good. This is the best we’re going to get until the series moves on to PS5 and Xbox Series X.

The Yard is a great addition to Madden’s deep roster of modes, and the expanded story is fun in short bursts.

The bugs I encountered weren’t bad enough to make the game unplayable, but they can be dis-tracting sometimes.