When you think of “pc gaming headsets” there’s at least a decent chance that the first peripheral to cross your mind was a Logitech headset. Logitech has proven themselves as one of the most popular brands in the market, and while typically the company hasn’t taken too many big risks in innovation with its new lineups, the new G733 wireless headset attempts to buck that trend.

Touted as incredibly lightweight, fast, and long-lasting, the G733 feels and looks different from other Logitech headsets, but that’s not always for the best. After spending about 40 hours with it gaming, listening to music, and just chatting with people, we experienced what we believe to be the full range of the headset’s abilities—and its limitations.

The headset’s design really shines in an overly saturated market of heavy-duty headsets filled with leather (fake or otherwise), padding, and machinery. The G733 breaks the mold (a bit) by being composed of incredibly lightweight materials, including a non-invasive, very comfortable mesh around the ears and a skeleton that feels more like a sturdy silicon than the rigid plastic I’m used to in other headsets.

That’s, unfortunately, where the comfort ended for me. I have a decently large head, and where that doesn’t come in the way of headsets often, it was an impassable hurdle when it came to enjoying this hardware. It’s a one-size-fits-all headset, similar to SteelSeries’ popular Arctis 7. The Arctis 7, however, fits my head. The G733 definitely does not, and the best I could do with it would result in the bottom of the ear cuffs sitting on top of the bottom of my ear lobes, rather than covering over them as they’re supposed to.

The top band was accordingly also very tight and uncomfortable. Luckily, I passed it around my house to my roommate and wife who have much smaller, more normal heads, and it felt fine to them. So instead of rating the headset too poorly for it being so uncomfortable, I decided to just dock a couple of points for the headset’s “one-size-fits-all” style not fitting “all” as well as other similar headsets.

After my not-so-satisfying experience with the headset’s design, I was hoping the sound quality and bonus features would make up for it to hopefully result in an overall cool headset. I was wrong, but I’m going to start with the things I liked, just to give it a fair shake.

The headset does have some cool features. The RGBs affixed to the front of the headset are neat, at the very least, and were adjustable to match the RGBs stationed around and inside the PC on my desk. If your desk is set up with a certain aesthetic in mind, that might mean a lot to you. Unfortunately, for me, all those RGBs really did was get a few “Wow, your headset has lights!” from coworkers in some remote meetings for the week I used it. The lights, combined with the headset’s slick design, made it look like one of the coolest headsets I’ve ever worn.

Perhaps the best feature of the headset is its battery. I use a wireless headset as my primary headset, and I won’t say which it is, but it’s relatively new and has some decent specs. I have to charge that headset roughly once every day and a half to keep it alive, and I spend all day at my desk working. The G733, however, could push three days without needing a charge. On a full charge, I was able to use it all the way to the very end of the third day before I heard the little warning beeps that it was low on power. By far, it’s the best gaming wireless headset battery I’ve experienced so far, and that’s saying something.

The actual quality of the headset’s sound left a bit to be desired. It wasn’t terrible, but there was a noticeable drop-off in quality, even in surround sound, compared to my other headsets. There’s certainly a chance that because I was using the headset pre-release, that the drivers available to me hindered the audio quality (and I certainly hope that’s the case for any would-be buyers), but it was lacking while I used it. The microphone quality also suffered. It suffered so much, in fact, that it was the worst aspect of the headset by a wide margin, and that’s coming from someone whose head the G733 didn’t even fit.

The mic quality was so far beneath any of the microphones I had on hand to compare it to, that I was only able to use it for about a day at the cost of severely annoying my coworkers and friends who had to listen to me speak through the fuzziness. I recorded some audio and listened back to it, and it didn’t sound like it could even get close in quality to my Blue Yeti or HyperX Cloud FlightS. In fact, the mic I had that compared the most closely to the G733 mic was my webcam mic, and we all know how rough webcam microphones can be.

Logitech headset mics are usually pretty solid, especially the Pro X whose mic rivals most standing mics I’ve used recreationally. Knowing that Logitech had the capability of pushing a solid headset mic on its other products only made the disappointing mic on the G733 all the more disappointing.

The price point of the G733 is a bit higher than I would have liked, especially considering the experience I had with it, but it’s not too terribly high, sitting at $129.99. 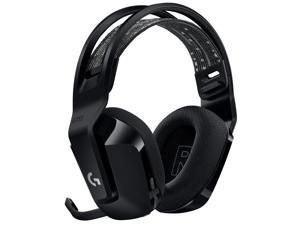 7.00 While the headset offers a wide range of features, not all of them live up to expectations.
9

One-size-fits-all sizing isn’t as all-encompassing as one might hope.

The headset’s shining glory is its battery life, which stands tall above competition.