Review: The Legend of Zelda: Link's Awakening is an amazing 26-year old port

Port, Remake, Remaster. We throw around these words a lot yet we never really take the time to define them. Ports are pretty self-explanatory, they are older games brought on to newer consoles. But what about remakes and remasters? Remasters tend to be older games with newer graphics while remakes tend to be games reimagined from the ground up.

You might be wondering why I’m pontificating on the nature of ports, remakes, and remasters in a review for The Legend of Zelda: Link’s Awakening. That’s because it really breaks our common knowledge of what these terms mean. It’s been called a remake, but after playing it, it doesn’t actually feel like a remake. This is not a Switch game inspired by a Gameboy game of the past, this is a Gameboy game that just so happens to have Switch graphics.

A quirky Zelda with no Zelda

If you weren’t around for the original Link’s Awakening, well it’d be understandable. The game came out way back in 1993 after all. For a 26-year old game, it has held up remarkably well. Before I dove into this new version, I dusted off my old copy of the original just so I can have a fresh frame of reference, and I had a ton of fun.

So here’s the plot for the newbies. After saving Hyrule, Link decides to sail the high seas. Unfortunately, nature decides to get in the way, and Link gets shipwrecked in the middle of a particularly awful storm. He washes up on the shores of Koholint island, a peculiar place where the familiar trappings of Hyrule seem to have been mixed up with other notable elements of Nintendo lore. Link is set off on a journey to wake the mystical Wind Fish in order to escape the island and find his way back to Hyrule. Of course, to do that he will have to find eight magical instruments locked at the bottom of eight dungeons which can only be traversed with a variety of interesting items, as is tradition in Zelda lore.

You’ll wander the overworld, slashing enemies, collecting rupees, gathering items, and diving into dungeons. You know the deal by now. You’ll encounter the normal spread of Zelda items including the bow, hookshot, flippers, and so on, but Link’s Awakening’s claim to fame is it’s one major unique item, the Roc Feather. This item lets Link jump like a certain Italian plumber who shall not be named. Many dungeons are themed around this feather, down to brief 2D sections that actually allow Link to stomp on some Goombas and participate in some light platforming.

Exactly as you remember

This is where the review gets a little weird. Normally I’d talk about how this remake differs from the original but, the thing is, it doesn’t. Yes, the controls are mapped to a controller with more buttons and yes, the graphics have been updated to have a sort of Rankin and Bass tinker-toy aesthetic, but the game itself hasn’t changed one bit.

The only major differences are quality of life improvements. For example, the map screen gives you a very high resolution map that you can place markers on. The addition of extra buttons means you don’t have to unequip your sword when you want to use a special item. Instead of being broken up into tiny screens the overworld has been sewn together into one continuous map.

As far as I can tell there are very few pieces of extra content. The biggest addition takes the place of the Gameboy Camera connectivity of Link’s Awakening DX, and that’s the ability to build a custom dungeon. As you move through the game you’ll find rooms that you can use to build your own dungeon to share with friends. The thing is, you have to use Amiibo to share them, which actually does feel like Nintendo is tacking on another $15 expenditure for this content which is definitely not a $15 value.

If you are looking for a gigantic new Zelda game, then this isn’t the game for you. See, Link’s Awakening is small, intimate you might say. The overworld is tiny. Dungeons are short. Puzzles are small and self-contained. Remember that this game was originally made for the Gameboy, which meant you needed to be able to complete objectives in the span of a medium length car ride.

And the Switch is a portable game console, at least in part. I couldn’t help, but find myself drawn to play Link’s Awakening in its original context. If you sit down on your couch and play on the big screen, Link’s Awakening feels like it progresses at a breakneck speed. You can finish whole dungeons in 10-15 minutes, especially if you played the original. In fact, this is a game that lends itself quite well to speed running. The only issue is that this quick pace also makes the game feel short on content.

But playing it on the go? That’s a whole different story. Yes, you are still beating dungeons in about the same amount of time, but everything feels bigger when you have to beat something in the span of a subway ride. Heck, failing to defeat a boss means you won’t be able to take another crack at it until you get home at the end of the work day! This game is so clearly made with portability in mind, so much so that I’d recommend playing this on the side while you play another bigger AAA game while at home on the couch.

Basically I’m playing what is essentially a 26-year old game with a major graphical face-lift. This is a game I first played while I was in grammar school, a game that even a young kid could complete on his lime green screened brick in the lunchroom. I was set for my nostalgia bubble to burst and for my childhood to be ruined.

But honestly, Link’s Awakening holds up. Not only does the original Gameboy version hold up, but this new version more than does it justice. Yes, it’s smaller, simpler, and easier to play than most other Zelda titles, but that’s OK. Challenge isn’t necessarily synonymous with quality, and Links Awakening has quality. The interesting world of Koholint, the crossover with other Nintendo properties, the amazing dungeon design, the unique jumping mechanic, all of these make Link’s Awakening stand out as a one of a kind Zelda title now, just as it did in the Gameboy ages.

The only complaint I have is with the framerate. This remake really must have been pushing the Switch to its limits because the framerate just cannot stay constant. Dungeons are OK for the most part, but the overworld can slow to a chug at times.  When it’s running at a full 60FPS it’s a gorgeous game, but when the framerate dips, it really does take you out of the action.

Still, that’s a small qualm for an otherwise amazing game. What’s more amazing is that I can make this claim. Few Gameboy games still hold up 26 years later, but Link’s Awakening does. Even if this is a near one-to-one port of the original, the original is worth playing and that makes this worth playing too. 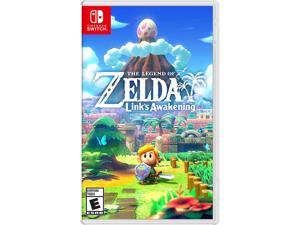 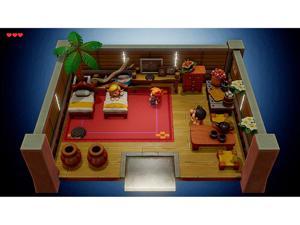 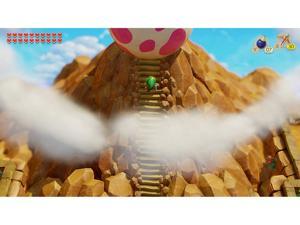 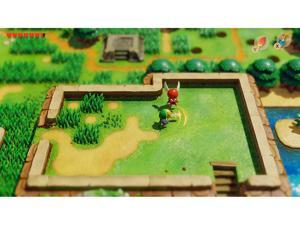 I really liked the new Chamber Dungeons but the fact that they were so closely tied to Amiibos was really a bummer.

I loved how the original played and I love this “remake” just as much.

The tinker toy aesthetic actually really fits the world of Koholint. This world is supposed to be quirky and childlike, and this art style gets that tone across perfectly.

What Link’s Awakening loses in new content it gains from being such a faithful remake. No, not remake, this is a port. It’s a port of a Gameboy game to a system several times stronger than it, but it’s a port nonetheless. You are playing the original Link’s Awakening when you play this game, and the original was fantastic, so this is too.