Review: Just Cause 4 is amusing but not engaging or exciting

In Just Cause 4, you get a grappling hook. It’s a pretty cool grappling hook. Also, a parachute and a wingsuit. And it all happens in an open world. It definitely does all of those things.

If you thought that Far Cry needed more traversal options or that the Arkham series should’ve given Batman a gun, you’ll like Just Cause 4. But that’s sort of the problem. It doesn’t really distinguish itself much from other entries in the open world genre.

Most of the gameplay centers around the aforementioned grappling hook. And yeah, it’s sort of neat. You can use it to zip-line from place to place. You can launch yourself into the air and deploy your parachute to float through the air. You can whip it at people. You can grapple hook them and then zip-line toward them and jump kick the hell out of them. You can use it to attach boosters and weather balloons to things and people. You can connect stuff to other stuff. It’s fun, for a while. I definitely felt some genuine glee for the first few hours as I wrought mayhem around the island country of Solis.

But it just isn’t all that impressive over a long period of time. Shooting dudes is faster and easier than attaching boosters to them and blowing them off of buildings. Yeah, it’s kinda neat to hook an attack helicopter to a building and force it to crash.

But enemy soldiers possess Imperial Stormtrooper-levels of inaccuracy and you are nigh-invulnerable, which means that escape is always a viable strategy. You almost always have enough firepower to kill your enemies, and if you don’t, you can run and hide, CoD-style, and wait for your prodigious amounts of health to regenerate. And the brick dumb AI makes gunfights fairly meaningless.

I wish JC4 was like the remake of Doom, another highly mobile shooter, wherein your health was mainly restored by killing enemies. If absurd kills via grappling hook restored health, it would encourage you to play the game the way the designers want you to, rather than simply running and shooting.

Advancement? Eh, who needs it? (This game, badly.)

There’s pretty much no advancement in this game. You can customize your grappling hook with a few different loadouts, and the game devs force you to use them in a few intro puzzles, but after that? You’re mostly just connecting stuff to other stuff to yank doors open, and then blowing up whatever’s behind those doors.

Given that every modern game from the Tomb Raider to Dead Cells has some kind of advancement, it feels conspicuously absent here. While it does cleave to the ludonarrative that Rico Rodriguez is a stone badass, deeply experienced in the arts of grapple-hooking and face-shooting, it means that the gameplay in hour one looks exactly the same as the gameplay in hour 10. Bullets in the face, grapple away, parachute, lather, rinse, repeat.

I’ve never been less excited to explore a tropical jungle.

Playing on the PS4 Pro, the graphics are also quite rough. Don’t let the glossy press screenshots fool you. Jagged edges and ugly textures await you in Just Cause 4. Am I spoiled by 4K on my gaming PC? Yes, I am. But there’s really no excuse for this. It’s not a limitation of the system; God of War and Gran Turismo Sport both look gorgeous. Just Cause 4 showed up in ripped jeans and a stained t-shirt and expected to be let into the party. Sorry, no. Spiderman and Red Dead Redemption 2 are right behind you, and they’re both wearing tuxes.

The design of some of the large facilities are neat, and provide a neat little jungle gym for you to grapple around in, but you will get sick of the concrete textures pretty quick, and the bases get samey as the game goes on. Level design gets a B+ but art design gets a C-.

I reserve a special annoyance for the cut scenes. Games like Telltale’s The Walking Dead mastered cinematic camera angles. The average JRPG’s missile circuses and speed lines deliver the joy of anime. FC5’s Seed family’s well-animated, well-voiced performances made you hate them with a furious passion. In comparison, JC4’s cut scenes are painfully bland. They feel like they were made by someone who’s never seen a movie and may’ve even missed the last three or four years of narrative-oriented games. Even cut scenes from PS3’s The Last of Us looked better than this.

JC4’s narrative is the barest skein of characters and stories connecting different mission setups. Ostensibly, you’re there to find out why your (supposedly peace-loving) dad made a weather weapon for a South American dictator, and you get wrapped up in a local uprising in the process. The dictator’s name is Espinosa and he has a tornado machine. He has a lieutenant and she’s blonde and pretty mean. That’s all I know about them.

Ostensibly, you’re one of the good guys, helping a rag tag band of rebels beat their oppressor. Yawn. You’ve seen it before. However, while it seems willing to let you wreak all kinds of havoc, the mission structure and story never winks at you, Grappling Hook Man, and says, “Hey, we both know this is ridiculous, right?” It plays it totally straight, which leads to a bit of ludonarrative dissonance.

For example, the island is big, and you need to get around. What’s the fastest way? Not wingsuiting as your horizontal speed is pretty low. So what’s the solution? Stealing cars. From who? The local folks of course! The glorious hero of the people goes full Grand Theft Auto on the people he’s supposedly helping. Viva La Revolucion! Even though I couldn’t give one single, solitary damn about the story, this felt weird.

As a sidenote: driving around the island doesn’t feel like a wacky joy ride. Cars handle decently but don’t feel fun to drive. When you hop on a caragor in Shadow of War or steal a technical in Far Cry 5, you get this sense of freedom and reckless abandon that is totally absent in JC4. 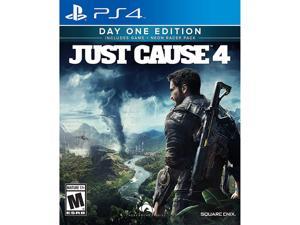 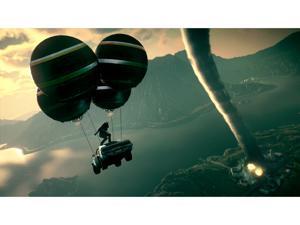 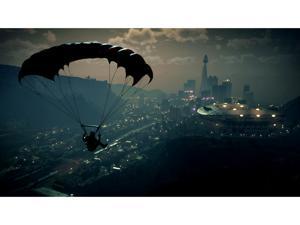 6.25 An open world game needs to be engaging and exciting for dozens of hours, and JC4 doesn’t manage that feat. It has amusing moments, but it isn’t $60 worth of fun unless you really love the series. If you’re interested in this game, I suggest you wait til it drops to $25 on sale. It’s a nice distraction, but not much more than that.
6

Just Cause 4 just looks old. We are in the twilight of this console generation. Devs and designers should be pushing hardware to its absolute limits, not putting out a game that looks like it rolled out of bed and didn’t bother to comb its hair.

There’s a grappling hook. Everything else here, you’ve seen before, and done better.

I just wish this narrative would have winked at me once, and acknowledged the absurdity of this entire situation. There’s certainly a ton of potential for it.

JC4 has its moments - they just wear out their welcome before you get too far in this game.

Review: Bloodstained: Curse of the Moon 2 is more classic...
Reviews
Jul 14, 2020
Platforms: PC (reviewed), PS4, Xbox One, Switch Konami has largely given up on the Castlevania franchise. After less than a year since its launch,...

Review: Neon Abyss is part Dead Cells, part Enter the...
Reviews
Jul 14, 2020
Platforms: Switch (reviewed), PS4, Xbox One, PC If you enjoy a good roguelike, then the past seven years have probably been a great time for you...