A confession up top: I’ve never been much of a flight sim guy. It’s not that I haven’t wondered what it would be like to fly a Boeing 747 across the country – it’s just the entire genre felt incredibly dense and inaccessible. Personally, if a game starts asking me to look at incredibly detailed instrument panels, my eyes glaze over and I reach for a game that lets me click a mouse button to explode something into tiny giblets.

This is all to say that the Honeycomb Alpha is the first flight yolk I’ve ever used and I’m having an absolute blast playing flight sims with it. It’s available for $249 on Newegg.

Immediately upon taking the Alpha out of the box and setting it up, I was struck with how well made it felt. The switch panel has real heft to it, weighing 15.2 lbs. The yolk shaft is made of solid steel with dual linear ball bearings. The yolk handles felt great in my hands, nice and roomy without any sharp plastic edges. Overall, the highest praise I can give the Alpha is that it doesn’t feel like a toy – every button has a realistic meatiness to it.

And as you might expect, there are a lot of buttons on the Alpha – the yolk handles have both vertical and horizontal rocker switches, an eight-way hat switch, and push-to-talk buttons to make you feel like a real pilot. The switch panel has a fully array of switches, too, and each one feels like it belongs on a piece of machinery. The 5-position magneto switch specifically has a satisfying chunkiness to it, clicking with each turn to give an immersive feel.

The Honeycomb’s mounting system is top-notch. There are two methods of affixing the Alpha to your desk – with a set of included clamps or with a sticky pad that’s on the bottom of the switch panel. The clamps added a lot of additional security, and I recommend using them. The clamps were incredibly easy to install and kept the Alpha locked in place. I never felt like the Alpha would give or slide around, or that any of the cables would fall out. The Alpha connects to your computer via USB-C. There’s also a short, coiled Ethernet cable that connects the yolk to the main unit.

For their first flight yolk, Honeycomb have really hit it out of the park. There’s honestly not much to criticize about their design, save for the subpar LED lights. The Alpha I’m honestly at a loss as to why they were even included. The LEDs are a dull, garish red (you can’t even change the color) that is both distracting and immersion-killing. While it’s nice you can adjust the brightness in incremental steps, it’s still ugly. I left the LEDs off and never felt like I was missing out on anything.

I loaded up the popular flight sim X-Plane 11 to test the Alpha out, and immediately fell in love. I had no idea how fun it is to fly a plane, and a lot of that is due to how responsive the Alpha is. The roll axis in particular was buttery smooth, due to the Alpha’s full 180 degrees of travel, which matches that of a real airplane. For the sake of comparison, most other yolks on the market have only 90 degrees of roll axis travel, giving a stiffer, less realistic feel.

Flying around, I felt completely in control of my aircraft. When it came to the pitch axis, while there thankfully wasn’t any stickiness to it, it needed a bit more effort to pull out than I initially thought as compared to the roll. I didn’t find this to be a problem per se, especially since I wasn’t worried that too strong of a pull was going to rip the Alpha off my desk, but it’s worth noting. On the plus side, the pitch centered nicely without having to force it.

While I was initially expecting a steep learning curve, I was surprised with how easy it was to get into it, and I think this is in no small part to the Honeycomb Alpha. The yolk feels so intuitive that it was easy for me to skip the initial struggle to get used to a brand-new set of controls get right into flying.

The only thing flight sim fans might find lacking with the Honeycomb Alpha is the lack of a throttle or rudder pedals included. While Honeycomb looks to have a throttle coming out separately soon, these additional controls really help sell the illusion of being in the captain’s chair, so to speak. It was a bit jarring to have to go to my keyboard for those functions. But I suppose this also speaks to how much fun I was having with the Alpha – I just wanted more. 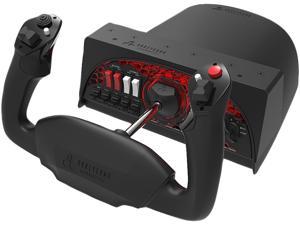 9.00 After spending some time with the Honeycomb Alpha, I just might be a flight sim fan. My first successful take-off was one of the most satisfying moments I’ve had in gaming in a long time. For hardcore flight simmers, the Honeycomb Alpha packs the most bang for your buck. You’re not getting anywhere near this level of precision and quality in this price range. If you’re new to the genre, or a jaded vet looking for a new yolk, the Honeycomb Alpha is an easy recommendation.
9

LED lights aside, this yolk is sleek and professional.

There are tons of buttons and switches that feel like the real thing.

Easy to maneuver and puts you in total control.