Review: Gravity Rush 2 is a physics-defying sequel that delivers

Despite the pop culture fantasy, few games have ever been able to truly capture the exhilarating feeling one would get if they could fly. No Superman video game has achieved that feat, and few others have ever came close, but I’d wager that Gravity Rush 2 might be the best attempt yet. That’s saying a lot, considering that the game’s protagonist doesn’t actually even fly.

Instead of a superhero with the power to fly, Gravity Rush 2 has you take on the role of Kat, a gravity shifter. She has the power to alter the flow of gravity around her so that she can fall down, up, forward, sideways, or any direction she pleases. Just look in any direction and trigger the gravity shift – that’s all it takes to send Kat plummeting in her newly defined orientation of “down”.

The Sky Is Falling

Gravity Rush 2, as the name suggests, is a direct sequel to 2012’s Gravity Rush on PlayStation Vita, which was eventually remastered for PlayStation 4 in 2016. While it certainly helps you appreciate the cast of returning characters and familiar events, playing the original isn’t exactly necessary in order to enjoy the sequel. In some ways, this sequel’s narrative is so robust and far-reaching that it not only stands on its own, but it wraps up loose ends from the first game and resolves many lingering questions fans of the series have had for years.

The game begins with Kat enduring a slave-like mining operation with the traveling air settlement of Banga. Crystals that live inside ore pockets have to be drilled open and acquired for their monetary value, and also to purportedly fuel the engines that keep the floating airboat cities from crashing to the ground. Prior to this predicament, Kat was engulfed in a massive gravity storm in the original game’s location of Hekseville. That sent her and Syd to this mining settlement and separated her from her feline companion Dusty, who grants Kat all of her gravity powers, as well as Raven, a fellow gravity shifter rival-turned-ally.

Just like any good Japanese-developed action adventure experience, you’ll need to spend a few hours learning the game’s characters, its quirks, its gameplay mechanics, and its areas before things really start to open up. At around the 3rd hour into it all you’ll reach a much larger town with dozens of missions, multiple regions, and hundreds of things to do and see.

What struck me most about Gravity Rush 2 is just how downright gorgeous it is to look at. The brightly detailed city looks great in 4K on the PlayStation 4 Pro and features excellent art direction and animation on the standard PS4 as well. Visually, it feels like a modern day manga reimagined as a teenaged girl’s superhero story and everything melds together beautifully.

An Open World with Layers

Reaching this game’s much larger city, a hovering multi-layered metropolis, is just the start of the journey. What begins as a personal quest to find lost friends and get back home quickly shifts gears to a tale of social injustice, inequality, and liberty. It’s full of powerful moments of cultural commentary, expertly crafted to be both specific to the game world and applicable to the real world around us.

The massive sprawling city is split into three layers. The main middle layer that you spend a few hours in when first arriving is the trading hub of the town. Streets overflow with markets and the hustle and bustle of city life fills your ears and eyes with goods and chatter. But the darkest corners of this faux-paradise are hidden just below and above the surface.

Far down below the trading district is the underbelly of the city, forever shrouded in rainy clouds, never to be spoken of unless in poor taste. This area is where the unfortunate, downtrodden, and poverty-stricken families scrape and claw their way from death, doing anything they can just to survive. On the flip side of this, high above the clouds in an Elysium-esque paradise are the homes of the rich and powerful. Servants are commanded around like slaves, while money and power are the only things that matter.

In one particular mission early in the game you get the objective to deliver a case of fuel. You’re picking it up from a supplier and can choose to either drop it off with the rich mistress that’s demanded it so she can fuel her party that night, full of gluttony and waste, or you can choose to ignore the request and drop it off at the lower city, where it could be put to better use as fuel to cook the food that feeds hungry children.

Through it all, Gravity Rush 2 caught me off guard in the maturity of its story. Some elements of the game’s plot could use a better explanation and, even though the original game isn’t necessary to play, newcomers may be a bit lost at first. Even for diehard fans, you’ll be expected to pay close attention to names and references so as to not get too lost in the weeds of details.

In the end, what I was anticipating to be a relatively straight-laced, light-hearted, and action-packed game about flying around and kicking monsters in the face ended up delivering one of the most thoughtful and poignant social commentaries that I’ve seen in a very long time – and managed to do it without undercutting its core premise and gameplay.

If you don’t care for reading dialogue and would rather mash X to skip past all of the beautifully drawn comic book-style cutscenes (something I do not recommend doing), then you’ve still got an addictive and deep game to play through.

Combat in Gravity Rush 2 takes a little while to get the hang of. You press R1 to unhinge yourself from gravity and float in place, then press it again in whichever direction you’re facing to send yourself plummeting forward. In doing so you can make Kat fall up, sideways, or any direction you want. To stop, press R1 and you’ll hover again, or you can press L1 at any time to make her fall back in line with normal gravity.

What at first feels clumsy and imprecise eventually becomes a freeing demonstration of innovative game design. You can tilt the Dualshock 4 in your hand to subtly tweak the arc of Kat’s shift and adjust the camera’s angle with the thumbsticks. There’s no way to lock onto enemies directly, but looking in their direction and delivering a combo or well-placed gravity kick never stops being immensely satisfying.

In addition to the core Normal gravity style that allows you to shift gravity, fly through the air, target enemies, deliver powerful kicks and throw objects all around, there are also two gravity styles that are entirely new for this entry: Lunar and Jupiter. With the Lunar style, Kat is almost lighter than air itself as she glides gracefully across the ground and leaps through the air as if she were weightless. You can charge up enormously high hurdles and easily rocket her body through the sky. On the other hand, the Jupiter style lets Kat increase her weight and power – as well as the affect of her gravitational pull – by slamming into the ground and stomping around with sheer force.

Regardless of which gravity style you pick (you can change on the fly with a flick or tap of the touchpad), the action is often too fast and furious for modern video game camera technology to intelligently keep up with. In tight spaces things tend to get muddled and lost, and it can be absolutely dizzying to track Kat in more complex encounters. And keeping a line on fast-moving enemies is often more frustrating than exciting.

Luckily though, when everything clicks, it’s a joy to behold, and few games can manage to make the sheer act of exploration and travel so exciting. I could happily spend hours aimlessly zipping around the environments, collecting items, and cleaning up side content. 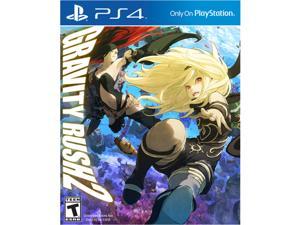 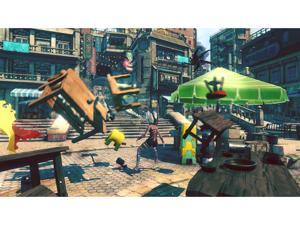 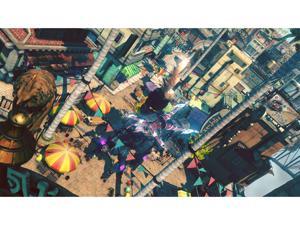 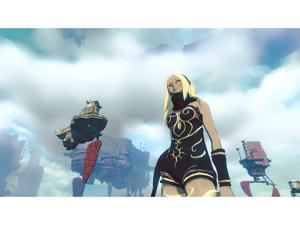 8.75 Gravity Rush 2 is the first great game of 2017. It takes what made the original a cult classic and builds upon that foundation in meaningful ways across all areas of the experience. Few games will make your heart race and palms sweat with excitement from moment-to-moment like Kat’s physics-defying journey through the skies.
10

This is one of the most stylistically cohesive, well animated, and expertly crafted games I’ve seen this generation in terms of visual and sound design. It’s like a watercolor painting and a manga had a baby.

The voice acting is sparse and isn’t an actual real-world language, but it’s pleasant and evocative all the same. The soundtrack fits the tone of the game perfectly.

With powers like Kat's, it’s tough to make sense of what’s going on at all times. You’ll get lost and frustrated on occasion, but when everything clicks (and it will after you get the hang of it) it’s one of the most liberating and exhilarating combat systems you’ll ever experience.

Some plot points fall on deaf ears and the details get muddled in the grandiose execution, but the mixture of personal self-discovery and societal class struggles wrap together into a far more compelling narrative than anyone would have expected.

Crash Bandicoot, Godfall, Spelunky 2 and everything else...
News
Aug 06, 2020
Another month passes and we are another month closer to PlayStation 5. We are coming to the end of the summer dry season and heading into the major pre-holiday...
DOOM Eternal, Elder Scrolls Online to get free upgrades on...
News
Aug 06, 2020
If you own DOOM Eternal or Elder Scrolls Online on Xbox One or PlayStation 4, Bethesda is hooking you up. The publisher announced this week that players who...