If you asked someone to sum-up Cuphead, they might tell you it is a 2D Contra style game, animated in the spirit of 1930s spaghetti animation. If you asked them to describe the experience with Cuphead, two words would summarize it well: It’s hard. Actually, it’s unbelievably hard. It’s that sort of nail biting, leg shaking, almost-drop-your-controller hard that older gamers have waking nightmares from in the days of the NES. Every single mistake will consume you. It will crush you, shatter you, grind you into dust, and you will love each and every second of it.

Let’s not beat around the bush with this game. Unless you enjoy playing games for the sheer, insurmountable challenge you are not going to enjoy Cuphead. The main attraction is the sense of accomplishment you get when you finally take down a boss after mastering its patterns.

In fact, Cuphead is 80% bosses. Most levels drop you immediately into a boss fight and end as soon as the boss is defeated. Remarkably, that is exactly Cuphead’s genius! It’s the 2D run-and gun experience boiled down to its key parts. You won’t be wasting time making progress through a level before challenging a boss. Random enemies won’t take your lives or steal your power-ups. You won’t die in a bottomless pit or some hidden spike trap. Instead, every level is you, at full health, with exactly the weapons you want, against the boss and their crazy bullet patterns.

Some might think that would make boss fights easy, but they would be very mistaken. Every boss absolutely litters the screen with bullets. Most bosses have multiple forms with multiple attack patterns. However, every attack is avoidable. Nothing is random. Every attack is telegraphed. Every pattern can be memorized. If Cuphead is anything, it’s fair. If you lose, it’s only because you didn’t play it well enough.

This is exactly what keeps Cuphead from becoming frustrating. It takes no time to hop back into a boss fight after a failure. It’s a matter of seconds, not minutes, before players encounter whatever attack last killed them. This rapid succession of attempts against the same attacks helps players learn quickly and perfect their mechanics. Did you get hit while standing? Try jumping. Did you get hit while moving to the left? Move to the right. Attack patterns are relatively easy to understand, you just need the reflexes to dodge them, and with enough practice anyone can eventually defeat even most difficult bosses. To keep players from giving up, a splash screen shows how close to winning they were after each attempt. Seeing your progress tangibly mapped out like this makes you want to jump back in and push just a little bit further.

Cuphead’s equipment system gives players a little bit of control over their abilities. You can equip two weapons, each with their own special attack, super attack, and a charm. This presents players with interesting choices before each stage. Do you bring in the weak homing attack? Perhaps the short range shot gun? Do you equip a charm that increases your health but decreases your damage? Or do you tailor yourself to offense? Players can develop their own style of play or change their weapons to suit each boss’s attack patterns.

To buy this equipment you need coins and coins can be farmed through more traditional platforming gameplay segments. However, these segments are completely optional. If you don’t need more cash you don’t have to do them at all. They are a nice break from the relentless boss fights, especially because they are far, far easier. You can also earn extra pieces of equipment form challenge stages

Cuphead is best when experienced with a friend. Boss fights don’t get any harder with a second player joining in, and the extra firepower is greatly appreciated. The second player can choose a completely different loadout, and this extra weapon variety also helps. In addition, players can revive each other after they die. So as long as both players don’t die at once, you can keep playing! The game is drastically easier with two players, which is good because the game’s easy mode is almost an insult. It makes many boss fights trivial and, most importantly, you don’t actually make progress on easy mode. The final stages of the game are locked until you beat them at normal difficulty, so if you need some help, bring a friend.

Cuphead’s incredible presentation is just icing on the cake. Studio MDHR paid incredible attention to detail in every aspect of the graphics and audio. From the grainy film filter to the constant crackle that makes all the audio sound like it’s being played on a vinyl record. Everything is expertly crafted to give the game the appearance of a traditional 1930’s cartoon.

The music is particularly amazing. From jazz trumpets to barber shop quartets, the soundtrack is a fully original blast from the past. You’ll find yourself pausing the game multiple times just to hear the background tunes. You might need to be into the retro aspect to appreciate the soundtrack, but I certainly did. It’s more than fitting. It’s perfect.

Despite the game’s old-timey presentation, it still plays fantastically. Studio MDHR made the wise decision not to compromise on frame-rate. While this does break the spaghetti animation illusion, it’s absolutely needed for a game that is so heavily based on instant reactions. The fact that the game is in full color also somewhat breaks the illusion, but the colors are vibrant and mix well with the fluid character animations.

The Story of Cuphead

Even the game’s narrative is a cut above the rest. It’s simplistic, of course, befitting a cartoon of the era, but it’s also subtly disturbing. It involves Cuphead and Mugman, two innocent characters drawn almost specifically to mimic Mickey Mouse, losing a bet with the devil and causing them to become essentially demonic hit-men. They now need to hunt down everyone else who has made a contract with the devil and collect their souls. It’s screwed up, but it somehow works. It feels like this, too, is a call back to the early eras of animation when our values were different and we had different views on what was and wasn’t disturbing.

If Cuphead has any flaws, it’s the default control scheme. Jump, parry, dash, shoot, and special attack are all mapped to face buttons with jump and parry sharing a button. Unfortunately, you are going to want to be doing many of these at once, meaning you either have to hold your controller with a claw-grip or remap your buttons. Even then, you can’t map an action to multiple buttons, which is kind of dumb considering the triggers go completely unused. With a little creative button remapping, you can make this work out to your advantage. I suggest mapping your shoot and lock commands to the triggers so that your thumb can be used for jumping and maneuvering.

There is also some weird problem with weapon switching. I could switch between weapons easily while standing still, but while shooting it felt like the game sometimes ignored weapon switching commands, even when the button was remapped. It caused a few unfair deaths, but not enough to ruin my enjoyment.

But overall, Cuphead is everything you could want it to be and more. It’s a difficult game that pushes you to master it, with a novel art style and an incredible soundtrack. What more could you possibly want from a twenty dollar indie game? If you have any love for 2D run-and-gun games, then CHis a must buy. Get it, play it, and don’t stop playing it until you’ve given the devil what-for! 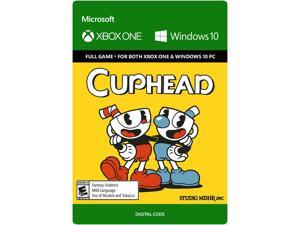 9.25 Cuphead is one of the most innovative and interesting games to come out of the indie space in the past few years. It was well worth the wait and will please anyone who likes a good challenge.
10

Cuphead nails its 1930s aesthetic perfectly while still running at a high framerate. It’s like you are watching a colorful version of Steamboat Willie… with guns.

If you are a fan of jazz, swing, and big band music, then you will love everything about this soundtrack. If you aren’t, you can still appreciate how well it fits the game’s retro aesthetic.

Cuphead is a perfect example of “difficult but not frustrating” gameplay. I’m not entirely sure it should have locked out pieces of content to players who prefer to play on easy difficulty, but aside from that it’s nearly flawless.

It’s a shame that the default control scheme is so bad, but with a little bit of button remapping you’ll be steamrolling bosses in no time.

The Fighting Game Community creates Code of Conduct to help...
News
Jan 19, 2021
Gaming, in general, has a toxicity problem. Sign in to any online game with your mic open and you’ll know that in seconds as you are bombarded with slurs and...