Corsair made a name for itself in the gaming headset space with the VOID series, which remains one of the industry’s most popular headsets to this day. Although the company isn’t exactly well-known for its headsets outside of that series, it hasn’t stopped trying to innovate whenever possible.

Corsair tried to break ground last year with an impressive new high-end model known as the Corsair Virtuoso, which we also took a look at, and now, the hardware and peripheral company is back with another contender—the Corsair HS60 HAPTIC.

The main selling point of the HAPTIC is also the headset’s namesake. It utilizes haptic sound to pick up lower bass frequencies, giving you a wider range of full sound and a subwoofer-like effect when those low-frequency sounds hit. To name the headset after this feature is bold because if the tech backing it up isn’t strong enough to be noteworthy, the whole idea falls apart. Fortunately for Corsair, that’s not a problem.

Headset reviews are strange for me, because they almost always start with or include somewhere, me talking about my own head, and no one likes to talk about the shape of their head. It’s weird. It is important to call out, though, because, you see, I have a rather large noggin. It’s not a big cube-like Brock Lesnar’s, it’s more similar to Adam Sandler, where it looks normal from the front, but then he turns and you can see the back of his head just keeps going and going and going and going.

That being said, shopping for headsets can be a real pain, because headsets usually come in two different variants. Either they’re a one-size-fits-all type of headset that just doesn’t fit all the way around my ears, or they have those adjustable slides on both sides that need to be extended all the way. The HAPTIC fits the latter, but its adjustable slides are very sturdy and made of some kind of metal (aluminum?), which means that it doesn’t feel more brittle or vulnerable when extended all the way. That’s a big win over standard all-plastic headsets.

Overall, the headset has this satisfying weight to it that I have to imagine comes from the robust sound system and metal highlights, but due to the soft memory foam padding on the ear cups and headband, that weight never veers into cumbersome territory. It’s always comfortable, even after wearing the headset for four or more hours at a time. It’s stylish, too, although I wish it came in more colors than just arctic camo.

Using Corsair’s trademarked Taction Technology, which definitely just sounds like someone having difficulty saying the word “traction,” and robust 50mm sound drivers, this headset packs a serious punch. This isn’t like most “impressive” sound technology, where you have to be an experienced audiophile to notice even a fraction of a difference. This is a very obvious, in-your-face type of difference that showcases itself in two very common scenarios: gaming and listening to music.

Music is probably the most obvious, as when you think of bass, that’s probably what you think of first. When listening to the first few songs with the new headset, I was greeted right away with deep, resonating vibrations on low notes and bass hits. But not the kind that your edgy friend in high school showed you with the botched subs in the trunk of his car. The bass you feel here is very crisp and snappy. While gaming, you get a strong face-first whiff of that feature, too. Explosions, for starters, literally rock your head, and other earth-shattering moments of combat do, too. Deep-voiced monologues by the game’s villain can shake your ears. And in surround sound, if a spear or arrow whizzes past your head, and can almost feel the wind by the headset’s ear cup shaking in response.

In other words, this headset does wonders for gaming immersion and provides a nice boost to music that you’d only expect to find in much more expensive studio headsets.

The HS60’s other features are nice, too, but aren’t as highlight-reel worthy as the haptic sound. The headset’s detachable mic is solid, and it boasts some decent sound quality and noise cancellation. The on-ear controls for adjusting volume and haptic feedback are smoother than most other headsets, which makes for ease of use. And finally, it’s compatible with Corsair’s iCUE software, so you can manage drivers and settings in the same program that you might use for your other RGBs or peripherals. 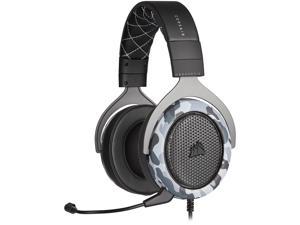 9.50 From top to bottom, the HAPTIC is a great headset, with a couple of standout features, other solid parts that meet industry standards, and no real drawbacks. If you’re looking for heavy bass in a gaming headset, it’s probably your best option.
9

The HAPTIC’s design is sturdy and sleek, making it a great option in the gaming headset space, but lacking anything in this department to make it stand out over the competition.

Despite the headset’s heavy weight, it’s comfortable and non-cumbersome even in the longest of desk sessions, which is pretty much the best you can ask for from a gaming headset.

The headset’s sound quality and haptic audio make it what it is. The boosted, crisper bass helps out in unexpected ways in gaming, improving immersion and giving you an overall richer experience. Listening to music is a joy, too.

The HAPTIC’s cutting edge sound system would be nothing if it wasn’t reliable, and without even a single bug during my review time of 10+ hours, it is the definition of reliability and strong performance.

Overwatch 2’s campaign finally fulfills an old Blizzard...
News
Mar 01, 2021
Overwatch has been an enormous success for Blizzard. It ’ s even more impressive when you remember that this is the first multiplayer shooter the company ever...