Review: Battletoads is like a Saturday morning cartoon delight

When you think about Battletoads, the first game that comes to mind is the NES original. It seems like we’ve forgotten that there were sequels and even a crossover with Double Dragon. And no one ever talks about the animated TV special. To be honest, though, you don’t really need to remember any of those. You should, however, take note of the new Battletoads, because the latest entry in the series is more than just a revival — it’s the best Battletoads game yet.

The first thing you’ll notice about Battletoads is how it embraces its quirky cartoon flair. The game just has that Saturday morning cartoon vibe. The whole thing is cheeky and self-aware, and it isn’t afraid to poke fun at itself.

The three toads — Rash, Zitz, and Pimple — have moved on from their past of intergalactic crime-fighting and have taken on regular day jobs. While Zitz and Pimple are happy in their office and masseur jobs, respectively, stamping endless sheets of paper isn’t enough for Rash, who longs for the days of adventure.

If you go back and play the original Battletoads, you’ll find that it still holds up quite nicely — mechanically, that is. Unfortunately, fun combat mechanics aside, that NES title can be unfairly difficult and features some really bad level designs. That’s not the case with this new Battletoads game. Everything has been revamped to make the gameplay and feel great. Pulling off combos is smooth and intuitive, battles are a lot of fun, and the vehicle stages are pretty great, too.

If all you want to do is jump into Battletoads alone or with friends locally and just mash on buttons to beat up baddies, you’ll find a bit of that here. Combos and special attacks are easy to pull off, but there are some really cool nuances that add depth to the action. You can spit bubblegum at enemies to trap them. You have a beefed-up guard break for pesky enemies that block your normal attacks. You can even do sweeping attacks that take out large mobs of enemies if you’re overwhelmed.

Where the original cult classic seemingly went out of its way to destroy you, this Battletoads provides you with a robust set of tools for success. You’ll still get juggled around a bit, especially on the higher difficulty settings (which can get frustrating), but you have a fighting chance thanks to just how smoothly every action plays out.

As previously mentioned, the vehicle stages in Battletoads are enjoyable, and that’s due to just how well they’re designed. They’re tough and maybe a bit too lengthy, sure, but they play out like extended obstacle courses. You’ll ride your hoverbike across narrow paths, jump over barricades, and shift left to right to avoid walls. I was dreading these sections based on my experience with the original game’s vehicle levels, but Battletoads really nails it and delivers quality auto-scrolling levels.

This is the best Battletoads game… of all time

Part of the reason Battletoads works so well is that it embraces its over-the-top nature. That’s the case for both the combat and the art style. Levels feature great hand-drawn character designs and 3D-rendered backdrops. Every level is infused with a lot of color that really makes the game feel like a playable cartoon. The cutscenes also look awesome and are akin to something you’d see on Cartoon Network or Nickelodeon. The style works incredibly well, and while purists may miss the pixel graphics of the original, this new look fits the tone of Battletoads really well.

The voice work in the game’s cutscenes is pretty solid, and the characters’ personalities shine through nicely. While the game may look like a cartoon for kids, the language is occasionally a bit adult, which gives Battletoads a cool little edge. Speaking of edge, the game forgoes a retro-styled soundtrack in favor of generic-sounding metal themes, which is a shame. I can’t help but think about how well the music of Streets of Rage 4 (another excellent modernization of a classic beat ‘em up) blended old school and contemporary sounds, and I wish Battletoads would’ve done the same.

There’s no denying the impact of the original, but this latest title does everything that game did, and it does it all better. When it comes to old school Battletoads, you’re looking at a super-niche game that’s way too frustrating despite its fun moments. That’s not the case here. This is Battletoads redefined and refined. The game takes old school arcade action and gives it a modern twist, insane amounts of charm, and really fluid gameplay mechanics. There’s just no way around it: Battletoads — to clarify, this new Battletoads game — is unequivocally the best entry in the franchise. 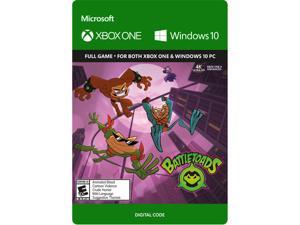 8.50 Battletoads is a highly entertaining beat ‘em up. It’s a throwback to the series’ roots while still managing to reinvent that series. The action is fast and flows smoothly, and the whole thing is just filled with slick style. This is a revival done right.
8

The combo-heavy action is frantic and speedy. Battletoads properly modernizes the series’ action with only a few frustrating moments to deal with. Also, this time around, the vehicle levels are actually fun.

The game looks a lot like a highly stylized cartoon. Everything has a really cool look, though a few enemy designs are hit-or-miss.

The not-quite-stellar metal music used in lieu of a more retro-inspired score hurts the sound a bit, but it isn’t too bad. The voice acting is decent, though, and really gives each character a fun personality.

Battletoads is one of those rare games that gets top marks for style. The whole thing just feels like a Saturday morning cartoon, and there’s something really special about that.

Review: Cyberpunk 2077 is the most fun I’ll ever have...
Reviews
Dec 14, 2020
Platforms: PC (Reviewed), PS4, Xbox One, Google Stadia Whenever a major AAA release comes out and half the gaming community calls it one of the best...

Review: Twin Mirror is a whole game of Bottlefinder 5000
Reviews
Dec 07, 2020
Platforms: PC (reviewed), PS4, Xbox One Dontnod has become known for being a studio that tackles some pretty heavy topics. Life is Strange not only focused...
REVIEW