First, we had gaming peripherals and hardware with LEDs. Then, RGB lighting started becoming commonplace, both inside and outside of PCs, in keyboards, mice, motherboards, and RAM sticks. And in recent years, more PC gamers and gaming hardware companies are looking for ways to extend lighting beyond the discrete components and peripherals entirely. That's where Corsair's new iCUE LS100 lighting system comes in.

RGB lighting anywhere you want it

The LS100 system is made up of a dongle that you plug in to both your gaming PC and an outlet. That dongle then has two ports, into which you can plug flexible RGB lighting strips. The strips can then be attached to the back of your monitor, your desk (top or bottom), or just about anywhere else you like, via included magnetic fasteners with adhesive backing. Acting as ambient light on the back of a gaming monitor is the most obvious use case for these strips, but as powerful and flexible as they are, they are likely to inspire some more creative uses.

These strips are controlled by the same iCUE RGB software you use with any other Corsair gaming gear you already have. They'll work just fine without matching peripherals, but they really look their best when they're flashing and changing colors in perfect sync with your keyboard and mouse.

The base kit, which you'll need to get started with the LS100, comes with two long (450 mm) strips and two shorter (250 mm) strips. The long strips have 27 individual LEDs each, while the short strips have 15 each. The material Corsair used to construct the strips does a nice job of diffusing the glow of the lights, so they give you an ambient glow or gradient between shades, rather than being an individual strip of points like a strand of Christmas lights.

The base kit helpfully comes with two extension cables, to help you start your lighting exactly where you want it. There are also eight cable management clips and 16 metal plate patches with adhesive tape on the back. Using these tools you can effectively run the LS100 strips along the back of your monitor, the underside of your desk, or just about anywhere else you want them to go (provided the control dongle can reach a USB port on your PC).

The strips are flexible enough to twist horizontally however you like, but aren't designed to arch vertically. That can present a little bit of an issue if the place you want to affix the lights isn't mostly flat, but in our testing the lights worked just fine on all the displays, desks, and standing desks on which we tested them.

The instruction booklet that comes with the base kit has a handy diagram for what is likely to be a common application for these lights - mounting them to the back of your monitor. That diagram suggests that you can affix the dongle itself to the back of the monitor too, which would provide an easy way to keep excess cords hidden.

In addition to the base kit you can buy two different expansion kits if you need more lighting coverage: one with two of the shorter strips and one with two longer ones.

Though each strip contains a number of individually addressable LEDs, I found that the visual effect worked best when confined to fewer colors, rather than more. After testing out a number of the different animations available, I settled on simple color shifting. The sight of my keyboard, mouse, and entire desk and workspace all bathed in the same shade of blue, green, and red, and all shifting in-sync with one another, felt very satisfying and futuristic.

The audio visualizer effect was particularly striking in the strips, as they would flash in time with the beats of your music, shading from white to green to red during the louder moments. There are also a few new modes that are new to iCUE and (as of this review) seem to be exclusive to the LS100 strips (though it would be possible to program your keyboard's lights in the same way, with some work). Of the new ambient animation modes, aurora and fireplace, which offer the colors of the Northern Lights and a crackling fire, are the most appealing.

The reliance on Corsair's iCUE software is both a strength and a weakness for this kit. The lighting strips can look really cool when synced with matching Corsair peripherals, but if you don't already have a Corsair keyboard and mouse then you'll be missing out on some of the extra visual flair those can offer. And while iCUE is powerful and has a lot of built in, pre-programmed animations, the software can be a little confusing to use at times, and there's no way to control the lights when they aren't hooked up to a powered-on PC, other than simply using the off button.

I also experienced some unpredictability as to what the lights would do when I powered down my PC or fully disconnected my laptop. Sometimes they would eventually shut off, sometimes they would keep the same static color, and other times they would revert to a generic cycling rainbow pattern. None of these problems are serious, but it's clear these strips are intended to be used with a desktop PC that can be kept plugged in and powered at all times.

Light for your dollar

It's generally a good sign when I'm reviewing a new product and people around the office stop to ask me how much it costs, and the Corsair iCUE LS100 light strips inspired that question a half-dozen times. They're eye-catching and bright, vibrant and flexible, and competitively priced as far as quality color-changing lighting options go.

The LS100 kits are going to be most appealing to customers who already have Corsair peripherals and components they can easily sync with these new lights. If you're not already in the Corsair ecosystem they're a bit of a tougher sell, but there aren't a lot of comparable products on the market designed specifically to be used with desktop PCs and monitors.

The core kit feels maybe just a little bit too expensive at $119.99, but both of the expansion kits - the short at $29.99 and the long at $39.99 - feel like solid deals for the cost. The photos in this article show you how much you many strips you can get with the core kit plus one of each expansion pack, and that's all for under $200. You can also easily start with just the core set, and see if you need an expansion kit to properly outfit your monitor and desk.

Disclaimer: GameCrate is owned by Newegg.com, a site which may sell the products being reviewed. GameCrate reviews represent the opinions of the GameCrate writer who wrote them, and not necessarily those of Newegg. The product used for this article was provided to GameCrate by the manufacturer or publisher for the purposes of conducting a review. The writer did not retain personal possession of the product after the review.
Platform: Hardware
CORSAIR iCUE LS100 Smart Lighting Strip Starter Kit, CD-9010001-NA 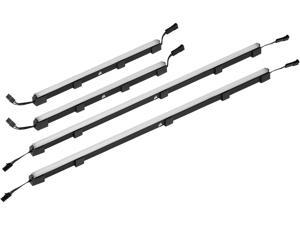 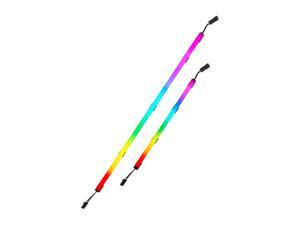 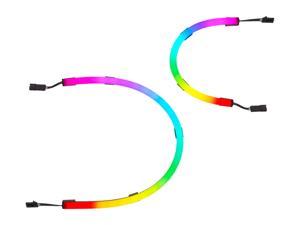 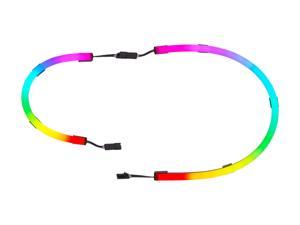 Videos
Apr 09, 2020
Corsair continues to upgrade, update, and refine their gaming mouse line with new versions of their multi-buttoned Scimitar model and the wired/...

Videos
Oct 18, 2019
Bajheera is a unique human. He's one of the best World of Warcraft PvP players in the world, competes in bodybuilding competitions, *and* runs a...

Videos
May 22, 2019
UPDATE: The sweepstakes is now over! We have contacted our winner: Brian Palmer (AKA Green Chicken Nugget) ! Thanks to all who entered! Neon...

We want you to write for us!
News
Jul 13, 2020
GameCrate is looking for a few good freelance writers! If you're a talented writer who knows about computer hardware and/or gaming and you want to contribute...