Monster Hunter’s most ambitious expansion in the franchise’s long history, Iceborne, arrives on PC this month after a few months of exclusivity to Xbox and PS4. The expansion takes the base game, Monster Hunter World, and expands on its many crafting and exploring systems, while adding an impossibly long list of monsters to hunt and new ways to hunt them.

We’ve already talked about Iceborne, though, and as this is just the PC release of the game that’s already been out since September, we're not here to talk about the same stuff. We loved it, as we have more than a couple veteran hunters who could actually dive into the new challenge and intensity that the expansion offers, but we also thought it was a little too harsh to justify buying if you’re new to the franchise.

When Monster Hunter World first arrived on PCs after nearly a year on console in 2018, it came with some significant improvements. However, did Iceborne make enough improvements to its PC version to justify staggering its release by four months? Are those improvements even worth mentioning?

The answer, fortunately for the laypeople of the Church of PC Gaming, is unequivocally yes. We’ve been playing the game (way too much) on Capcom’s beta server over the last month, and having a lot of fun. This monstrous expansion has truly been done justice on the PC, so much so that it would be hard to return to a console version after booting it up on the rig. Its scenery is breathtaking, movement is snappy and bug-free, and combat is downright cinematic, especially with all the new features.

Watching the Fulgur Anjanath, which is essentially a lightning-breathing T-Rex, hock a lightning loogie at my head in stunning 100+ fps at 1440p is equal parts awe-inspiring and vile, and I just wouldn’t be able to experience that mixed emotion if it didn’t look so darn good.

What makes this game look so stunning in its PC release? One only has to venture into the “Advanced Graphics Settings” portion of their menu to see some of the differences listed out right away—features and knobs to turn that don’t even exist on the console versions.

As many PC gamers have criticized, as is their right, it might seem a little odd that the Iceborne PC launch was staggered a few months. Well, all of these new graphical settings seem to justify it. There’s a lot more functionality and a vast number of features to toy with that console plebs (sorry, you’re not plebs, I just like to make fun) will never ever experience.

You can adjust the usual PC graphics settings like texture and image quality, as well as ambient occlusion and shadow quality, but you can also adjust volume rendering, contact shadows, diffuse lighting, and subsurface scattering. It opens up more opportunities for smoother and prettier gameplay. I’m honestly surprised the PC launch costs the same as the console launch.

Again, this game is very, very pretty. Like, prettier than we had any right to expect, and prettier than I ever expected a Monster Hunter game to get in the 15 years I’ve been playing it. And you can only really experience that to the fullest if you play it on PC.

Performance comes at a cost

Within all of those beautiful snowflakes, translucent ice effects, and long list of graphical settings to alter them within the menu, though, comes the downside of playing Iceborne on PC. If you want to experience all of those cool things, you need some impressive hardware. Without it, you’re left with what feels a game that hasn’t met its full potential, because it hasn’t.

The game is beautiful, and being able to turn all those cool graphical dials up to 11 can be a really big selling point, but facts are facts. In Steam’s last PC hardware survey of 2019, the GTX 1060 graphics card still claimed the title of “most popular” in the GPU field, by a mile. It wasn’t even a close fight between the 1060 and the runner-up, the 1050 Ti. And guess what? Neither of those cards can run many of those cool features in Iceborne.

The 1060 is the card that Capcom lists as the recommended GPU for the expansion, but if you have one, and there’s a good chance you do, you might be able to get away with everything set to mid-level graphics, at best. It becomes a game of “what can I cut to make sure I hit a decent framerate?” and that’s not a fun game to play. I played the Iceborne review copy on a 1080 Ti, and that even struggled at some points, when the weather was really extreme or a monster launched a massive attack with screen-wide animations, especially when I tried to run everything maxed out. To be safe, I was forced to cut some corners in my graphics settings.

If you have the computer to back it up, this expansion is absolutely breathtaking. There’s no arguing that. And in the world of computer graphics, that fact is true about many, many modern titles. But I wanted to highlight the differences between the console and PC versions of Iceborne here, and you can really only experience those differences at all if you have an expensive rig.

Now excuse me while I go fight my 62nd Deviljho in an attempt to get a part for a cool gunlance. 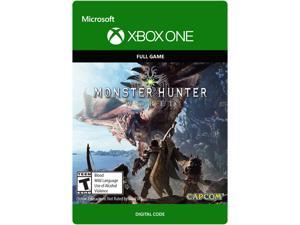 Videos
Oct 14, 2020
Ever since it was announced, Monster Hunter fans have been looking forward to the movie adaption of the game. Starring Milla Jovovich and directed by...

News
Sep 06, 2019
One of the scariest monsters to stumble across in Monster Hunter World's first official expansion, Iceborne , is the Blackveil Vaal Hazak, a variant...