Mario Kart Live: Home Circuit: An interesting gimmick that is more trouble than it’s worth

This is not a review of Mario Kart Live: Home Circuit. It’s not even a “hands-on” or an “impressions” opinion. This is me, wholeheartedly asking Nintendo “why?”

Not to be hyperbolic here. It’s not that MKL is bad by any means. It’s not that I’m offended by its existence. In fact, I’m quite impressed by all the options that Nintendo has included in this package. What I don’t understand, however, is why Nintendo has put so much effort into a gimmick like this, when the same gameplay elements would be served so much better in a traditional Mario Kart title.

Make no mistake, MKL is exactly that: a gimmick. It’s an opportunity to control an RC Mario Kart in the real world, and use its camera to make ARG courses. It’s really neat, but once the novelty wears off, that’s all it ever was, and all it ever will be. So if that elevator pitch doesn’t grab you, the rest of the package won’t either.

Honestly, I’m not MKL’s target demographic. I live in a small apartment with a roommate and her dog. My own room is so small that it isn’t even technically zoned to be a bedroom (gotta love those New York living situations). There’s a limit to what I can get out of this little tinker toy. It’s clearly designed for families with little kids that can oooooh and aaaaaah at the spectacle of a tiny little Mario driving a car around their home.

But even then it’s a double-edged sword. Mario can only race on pristine surfaces. No carpet. No ramps. No outdoor environments. No dust. No debris. Nothing. This would be better titled as Mario Kart Live: Warehouse Circuit because that’s where you should be playing, a big empty warehouse.

Just a little bit of pet hair will shut down your remote-controlled Mario in the span of an hour or so. You’ll need fairly wide areas to make effective turns and all foot traffic on your courses has to be restricted. This means picking up MKL to play casually is… never going to happen. Every session of MKL is a project. Pick up rugs. Sweep the floor. Corral the pets. Unfold the cardboard gates. Weigh them down. Draw your course. So on so forth.

The thing is, so many things can still go wrong. If your gates get jostled around, suddenly the course cannot be completed. If real-life obstacles fall in the way of your course, computer opponents will drive right through them while you have to dodge around them. Once again, this is all good for a laugh for the first few hours that you take MKL out of the box, but it gets frustrating really quickly if you actually want to play the game. Then that frustration fades to worry when you bonk into a wall hard enough that your video feed drops, and you wonder if this expensive peripheral has just become a Mario shaped paperweight.

There’s a lot that you should be able to enjoy. You are given circuits to play, but these are really just small rules variations when driving through your own courses. Driving on an ice level will introduce traps that will freeze you and slow you down. Driving on Rainbow Road will give you a ton of boosts that push you around the course wildly. You can race through an entire Mario Kart cup on one track alone.

Which, again, is neat, but if it was so easy to introduce all these interesting variants into Mario Kart why not add them to Mario Kart 8. I would love to race entire tracks with Rainbow Roads physics or turn everything into a 16-bit retro course similar to the SNES original. Why limit these neat twists to this ARG?

For that matter, why is course creation something that has only been fiddled with here? All you really do to make a course is drive around to lay the track. Why can’t we do that in any other Mario Kart title? We already know how creative the Mario fanbase is. Just look at Mario Maker. It’s just a shame that the creative side of Mario Kart is cut off for people who have time, space, and $100 to throw at an RC tinker toy.

And $100 is a lot of money for the massive checklist of things you can’t do with Mario Kart Live. Like, don’t drive more than five meters away from your Switch. Don’t drive on the other side of walls that can block your wi-fi signal. Don’t make your curves too tight or else the RC car can’t handle it. Don’t drive on uneven terrain. Don’t make any jumps. All of this makes sense when you realize that you are driving an RC car around physical space, but the game wants you to forget the RC car and instead focus on the race.

In fact, the RC car itself is kind of a bit of a smoke and mirrors show. You don’t have 1-to-1 control over it. Rather, you drive a virtual representation of Mario, which has a little bit of its own built-in course correction, and the RC car follows suit. While this is pretty much needed to make any sort of race run smooth, it’s not long until you start to see the seams come loose.

If you lose connection, your video feed will stop until you gain it again, and by that time your car will go who knows where. If you pick up a bullet bill, you will attempt to navigate the course automatically, but will very frequently drive into walls and stop. Heck, even though you get to draw a whole course, the only thing that really matters is the gates. As long as you pass through them, you’ve done your job.

In a way, Mario Kart Live is kind of a game of pretend. You know that racing in your home will never quite be the same as the wild and wacky Mario Kart races you’ve played before. You know that time-trial mode, or any mode racing against the computer, will be unfair because they won’t have to deal with real-world space. You know that versus mode might be neat, but that just doubles the connectivity problems and spacing issues, not to mention you need another friend with another Switch and another $100 to drop on Mario Kart Live… who is willing to come over and be inside over long periods of time during a pandemic.

Do you see the issue now?

Anything else that you can unlock in Mario Kart Live is hampered by its real-world constraints. Unlocking new high-speed modes seems fun until you realize you just don’t have the space to drive at that speed in your apartment. Unlocking new weather conditions is also great, except it means you have to set up your apartment all over again for new tracks to try them out or just replay the same course over and over again. It’s just a lot more trouble than it’s worth, certainly more trouble than I ever want to spend when playing Mario Kart.

Mario Kart Live: Home Circuit is pretty much on the same shelf as Nintendo Labo, which is to say it’s a really neat gimmick that I just don’t want to have anything to do with. Someone out there is going to love this. Families will for sure. But for anyone else looking to actually play Mario Kart… well just play Mario Kart. Mario Kart Live: Home Circuit is expensive, and it’s expensive for not a whole lot of amusement in return. Right now people are posting hilarious videos of their cats blocking off Mario’s path, but do you think we will care about that a week from now? A month? A year? No.

But how many of you are still playing Mario Kart 8 even though it came out in 2014?

Nintendo, please port all the cool features from this little toy into normal Mario Kart. That’s really the best thing that can happen here. A mainline Mario Kart title with track creation would be groundbreaking, especially in our current socially isolated environment. But this little ARG? 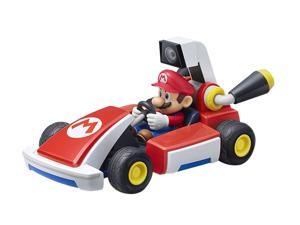 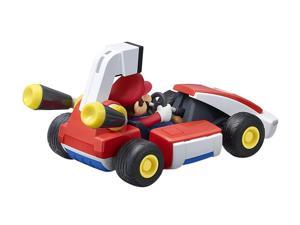 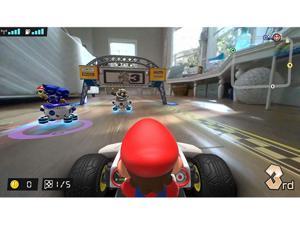 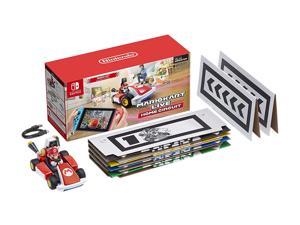