Sea of Thieves is having a great year. When the game was initially launched in 2018, it was relentlessly ridiculed by the gaming masses for its lack of content, saved only by its beautiful ocean waters and engaging PvP. Throughout this year and the end of last year, though, developers at Rare have been pumping it to the brim with massive, free updates containing what the game lacked most: Content.

Throughout that time, the game reached new heights, often nearing the top of Twitch’s category list thanks to streamers like Summit1G and Pace22. And now, after it seems the developers are happy with the state of the game and the pace of its update cycle, the latest update, which arrived last week, added something that the game has never included before.

Brace yourself and get ready to check your blood pressure, because Sea of Thieves now has microtransactions.

Microtransactions don’t have to be evil 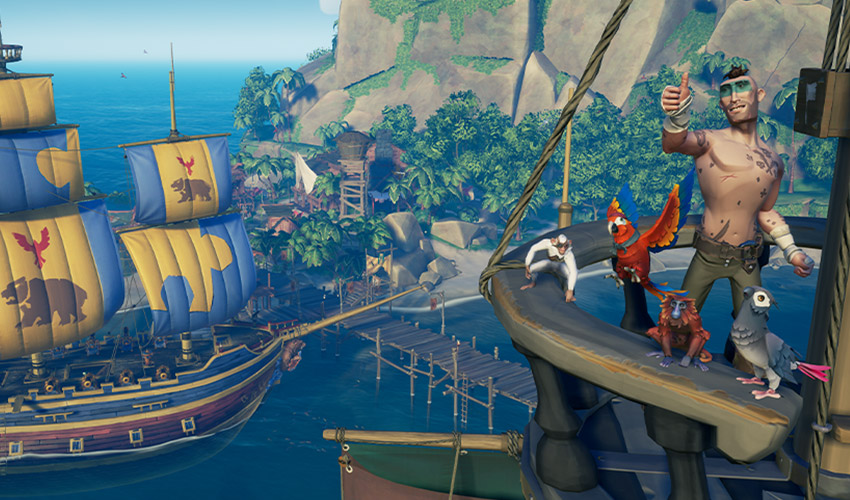 The word alone is a bit of a fopa in gaming. Whenever you hear it, you probably have a sour taste in your mouth due to so many companies, even major studios, abusing them to make an extra buck. The truth is more complicated, though, because microtransactions themselves aren’t bad or evil. They’re a very real and honest way to support a developer, so they can in turn support a game with great updates for years.

The only reason the word “microtransactions” triggers our flight or fight response now is because so many developers have abused it with predatory loot boxes and pay-to-win mechanics. See: Any recent Fifa or Battlefront game.

Sea of Thieves, luckily, doesn’t abuse the system at all. You have full control over what you’re buying, and there is no randomness or opaqueness to it. You see the full menu of things to purchase, and if you don’t like something, absolutely nothing is forcing or even tempting you to buy it. And, as anyone who’s played the game knows, all players have access to the exact same firepower and ships for no extra cost, and these new microtransactions don’t change that. That alone is something we love. As for the microtransactions themselves, though, I have some thoughts. 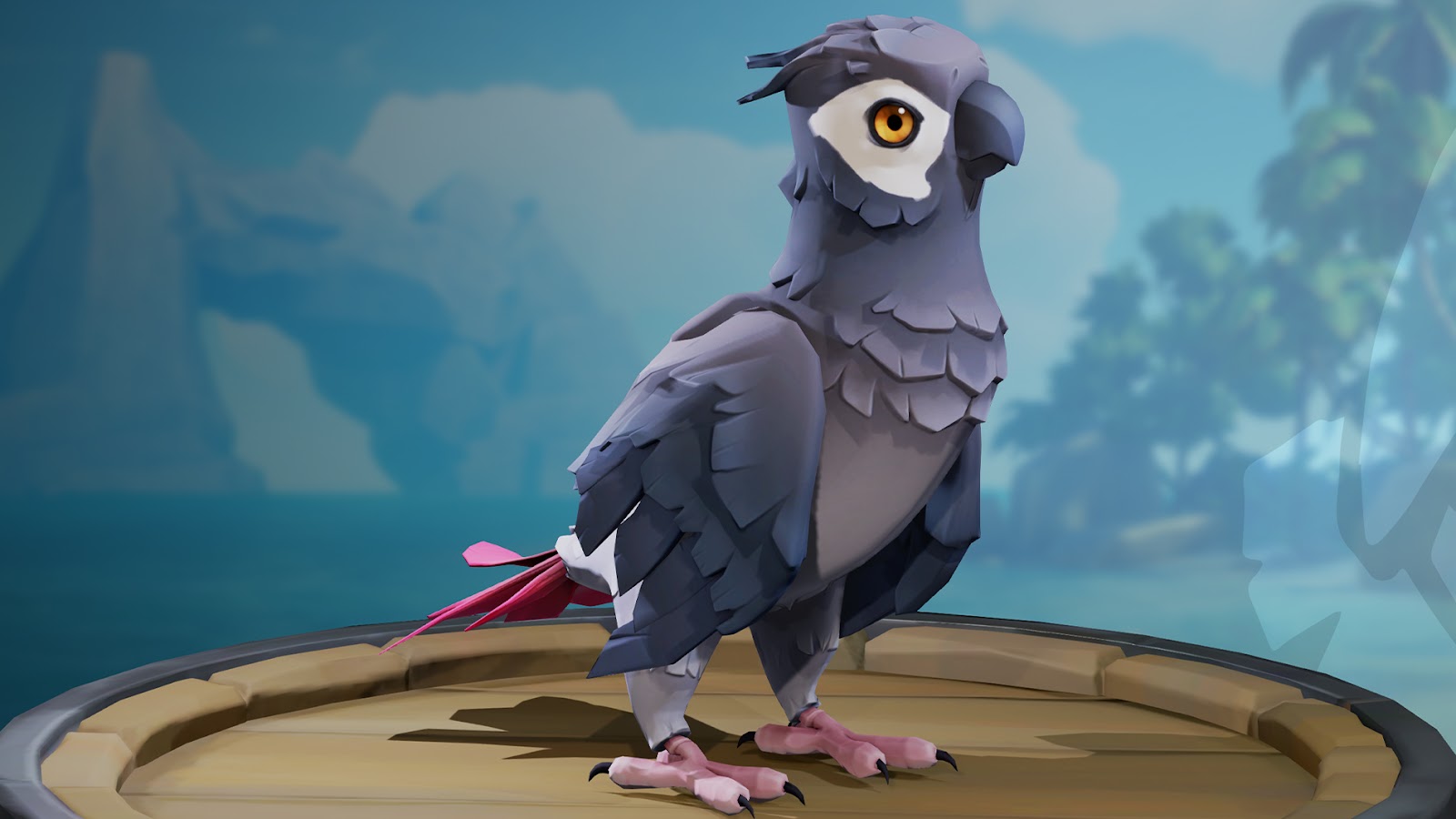 As we’ve already mentioned that Sea of Thieves treats all players, whether they be brand new or 300-hour veterans, equally, adding something like a microtransaction is tricky. Since everyone’s pistol packs the same punch and any player can access any ship for free, the game is driven by cosmetics and achievements entirely. One could argue that achievements are only worth which cosmetics they unlock, too, driving the point back toward just cosmetics alone. Microtransactions, then, need to follow that same philosophy, no matter how much you pay for them.

The challenge that devs at Rare were faced with was this: How can you add an unlockable that’s unique enough to want to spend real money on without altering the theme of the game? They needed to add something that’s purely a cosmetic but that is so cool and so shiny that it stands apart from the other hundred cosmetics you can get in the game already. Their solution? Pets. And damn, the pets are cool.

You get two animal options—a monkey and a bird. And within those options, you have more options. The monkey comes in two variants, each with a palette of colors to choose from, and the bird functions the same. I picked up a bird for myself to see if it was worth the $5 price tag. As I haven’t spent a dime on the game since launch, I felt $5 was easy to justify. The little bird, which I named Steven Seagull (obviously), was certainly worth the money.

The pets in Sea of Thieves aren’t just something that gets glued to your shoulder as any old cosmetic. They feel alive. They move around, they follow you on islands, they free-roam the ship when you’re on the water, they dance, they take naps, they hide when a Kraken attacks, and the list goes on. They have artificial personalities that make them feel like an addition to your crew rather than just an unlockable hat, or a hull, or a sword. I sailed around with Steven for about five hours over the course of the weekend, and was constantly surprised at the little things he could do. Then, however, I tried out the other microtransactions available in the emporium, and was immediately met with disappointment. 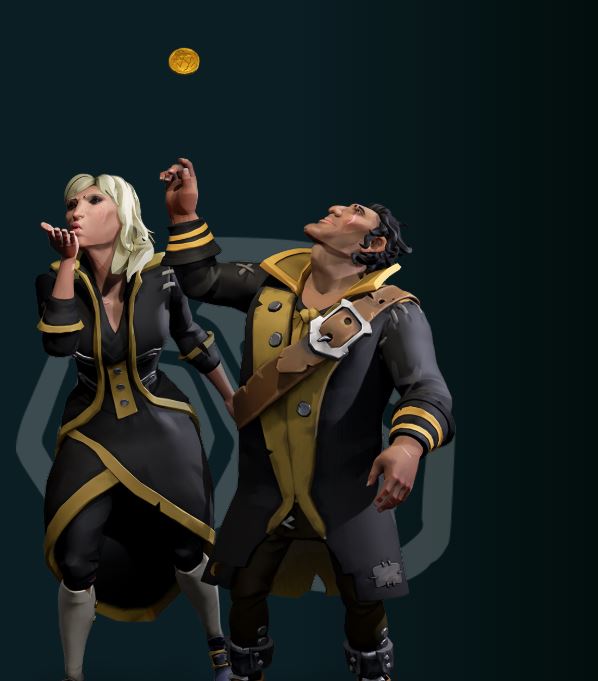 The shining glory of the new microtransaction shop is certainly the pets, so it’s not a huge deal to me the other stuff flopped so hard. That being said, someone could really like the other unlockables, so it’s important to remember that this is my opinion. I’ll break it down in detail so you can at least understand my reasoning.

The non-pet parts of the emporium can be broken down into two categories: Emotes and collectible cosmetics. I dislike both. The pets did a great job of offering a purely cosmetic option to the game that’s interesting enough to spend money on without altering how the game is played. The emotes and other cosmetics, however, are super boring.

Emotes in Sea of Thieves aren’t used for much of anything. More often than not, you’re using the sleep emote to hide behind a table on someone’s ship, or you’re using the point emote to look at your shiny outfit. For any other purposes, be it trolling your crewmates or just doing weird stuff for the sake of it, you have instruments, an ale tankard, a bell on the deck of the ship, and more, all of which are more interesting than emotes. The emotes that Rare added aren’t exciting enough to change that pattern, either. Far from it, in fact, and that makes it very difficult to justify picking one up.

The other category, being the collectible cosmetics, are just as bad. You can get a new ship hull and other various ship parts all themed off of one of Rare’s most popular games—Banjo-Kazooie.

The problem is, the only thing even related to Banjo or Kazooie is the fact that there’s a bear and a bird on the sail and in other various places within the designs. They aren’t Banjo or Kazooie, they’re just a bird and a bear, and I imagine it was done that way to keep in tone with the rest of the game’s cosmetics. The issue is, though, that without having those characters blatantly on the designs themselves, there’s nothing about these cosmetics that stands apart from all the other stuff you can get in the game already. Look for yourself. 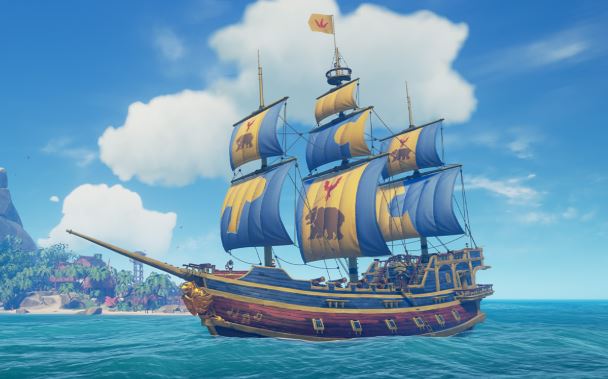 The design itself isn’t bad. It’s important to keep that in mind. It’s just not unique enough to justify spending money on. It’d be much more worthwhile if it were added into the game as part of a Banjo-themed event, where you can complete challenges to grab each part. There are other various ideas that make a lot more sense to add to the store. A new instrument type, livery for your ship, new types of sails that don’t alter your ship’s speed at all, anything like that, as long as it isn’t the same as everything else that I can get for free already.

To test out this new content, we played Sea of Thieves on a gaming PC, which included 16GB of high-speed RAM, an i7 3770 processor, and an Nvidia GTX 980 GPU. Nothing too pricey by today's standards, but Sea of Thieves doesn't require top-shelf components to run with high graphics.

News
Mar 26, 2018
In the new action/adventure game Sea of Thieves , the good people at Rare give you the opportunity to sail the high seas, so you can plunder and...

News
Feb 13, 2018
Sea of Thieves is getting ready to launch on March 20 and the folks at Rare want everyone to be ready, especially if you’re playing on PC. In a new...

Sony, Microsoft, and Nintendo’s strategies going into the...
News
Sep 22, 2020
PlayStation 5 and Xbox Series X are now dated, priced, and basically sold out. We have less than two months before consumers will (presumably) be able to have...