For almost a year now I’ve been enjoying the growth of cloud gaming through Google Stadia, Xbox’s Project xCloud, and Nvidia’s GeForce Now. Amazon recently announced Luna, its new cloud gaming service that’ll be launching in the near future, and I’m looking forward to checking it out too.

One of my favorite aspects of cloud gaming through these services is the ability to play AAA games on my phone. Not mobile games, mind you, but big-budget games that you play on console and PC like Red Dead Redemption 2, Assassin’s Creed Odyssey, and Destiny 2.

Both solutions, however, are a bit cumbersome when it’s time to get up, get moving, and go about your day. Both controllers, along with their respective clips take up space in whatever bag or backpack you take with you on your daily outings.

Razer’s Kishi is a universal mobile gaming controller for Android phones with Type-C connection, specifically designed to cater to cloud gaming working best with Pixel phones and Samsung Galaxy S8 to S20 and Note 8 to 10+. I’ve been toying around the Xbox-branded version of the Kishi for Android (there’s also a standard version for Android and a version for iPhones) which comes with an Xbox One controller aesthetic.

The design of the Kishi makes it easy to carry and travel with. The controller is thinner and more compact than the Stadia and Xbox One controllers, not taking up much space in my messenger bag, and is also lighter. Expanding the controller to use, and collapsing the controller when storing is a breeze. There’s a little locking mechanism on the back to keep the controller closed when not in use.

Installing my Pixel 3 is pretty simple, however, I do have to remove the protective case from my phone in order for the Type-C connection to connect to the phone. That’s something I didn’t have to worry about when using the clips and other controllers. When the controller expands, there’s a rubber backing that stretches to accommodate a variety size of phones.

I used the controller on both Stadia and Xbox’s game streaming service, playing games like Destiny 2, DOOM Eternal, Mortal Kombat 11, Carrion, Streets of Rage, Dead Cells, and others. The low-latency was a joy. The games were responsive to my movements, trigger responses, and button presses. I still need to get used to not having haptic feedback (rumble) while cloud gaming on mobile, it’s not available on any controller while using mobile devices.

While I used Bluetooth headphones for most of the time I was playing with the Kishi, the controller does have a couple of speaker ports to amplify the sound of your game if you’re playing without headphones. And yes, it gets pretty loud. In addition to the ports, there’s also a Type-C charging port where you can connect your charger and keep your phone charged up while gaming, either with a wall charger or if you’re on the move with a portable charger.

If there are any concerns around the Kishi controller, it would probably revolve around the size of the triggers, which are about half the size of what we’re used to on a standard controller. They work fine but could take some getting used to depending on the size of your hands. The other concern may be the sturdiness of the controller. While I’m not one of those gamers that intensely grips the controller when playing games or flails about when trying complete difficult maneuvers in a game, I could see how for players that do, if the controller is expanded in a certain way, the phone could pop out, or throw off a maneuver or too. That’s something to keep in mind if you’re one of those physically aggressive gamers.

Overall, I’ll be using the Razer Kishi as my first choice when it comes to cloud gaming. The compactness of the controller, the low-latency, and the comfort when playing seals the deal for me. I’ll definitely be on the lookout for alternatives, especially if they’re offering haptic feedback, but at the moment, the Razer Kishi works best for me. 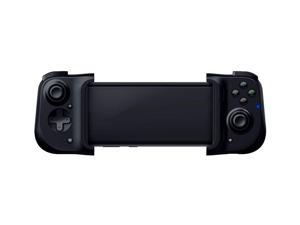 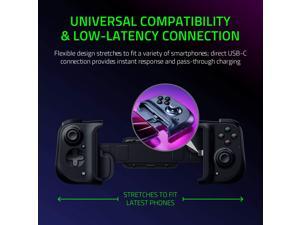 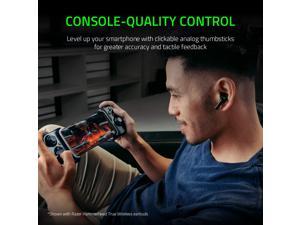 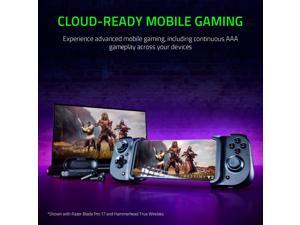