Mario Kart 8 Deluxe is being pitched as the greatest and most complete version of Mario Kart 8 available, and after playing it at PAX East it's easy to see why. An enormous roster of drivers is unlocked and available right from the start, including several new faces we didn't see on the Wii U, and players now have the ability to carry two items at once, which provides a huge amount of added variety to one of best kart racing games ever made.

The Battle Mode side of Mario Kart 8 has gotten the biggest overhaul with the new Switch version, with the addition of four modes and eight courses which weren't present in the Wii U game. I spent the better part of an hour hands-on with these new modes at PAX East in a five-player LAN match, and came away just as charmed as ever by the polished and entertaining Mario Kart experience.

In the original Mario Kart 8 Battle Mode was limited to Balloon Battle, in which players earned points by attacking other drivers and popping the balloons attached to their carts. The new Battle Modes available in Deluxe include:

Renegade Roundup offers a kid-friendly Nintendo take on Need for Speed, with an "Authority" team chasing down "Renegades" and putting them in jail by chomping them with their Piranha Plants. The Piranha Plants even have little sirens on their heads, which is a fun touch. The Renegades win if even a single one of them is free from jail when time is up, so a skillful and evasive Renegade driver can keep his or her team in a match solo.

Renegades can also drive over large buttons on the battle maps which open up the jail, springing all the captured Renegades. This was a big part of the battles we played, and after winning my first match on the Renegade side I wondered if the mode might be a bit too unfair to the Authorities. Once we switched sides, though, we were able to get all the Renegades in jail at once before time ran out, so my fears about the mode being unbalanced may have been unfounded.

It will be interesting to see what competitive players make of Renegade Roundup because even over the course of just two matches strategies began to develop in our group. By the end of the second match I was camping on one of the jailbreak buttons as an Authority, trying to guard it once we had several Renegades in jail. A good driver would have been able to get past me or over me regardless, but this definitely felt like the right move on my part.

In Shine Thief, players battle for control of a Shine Sprite, attempting to hold on to it for a 20 count in order to win. There are no teams in Shine Thief, and it's important to note that your personal 20 count doesn't reset once you've lost the Shine. You just need to hold it for 20 seconds total over the course of a match to win, which is much, much more difficult than it sounds.

Our Shine Thief battle raged for at least five minutes (it's hard to say exactly), with the Shine going back and forth constantly. Because your counter doesn't reset, every skillful move, dodge, and use of an item helps you on your path to victory, and breaking away from the pack for just a few seconds gives you progress that you won't lose just because you lost the Shine for a bit.

In the end I had my counter down to just two seconds remaining after some sharp turns allowed me to avoid most of my pursuers, but I eventually lost my grip on the Shine and could never quite get it back. This mode is a great addition to Mario Kart 8's battle side, and will likely be a hit with groups of varying skill levels or odd numbers thanks to the lack of team play.

Mario Kart 8 Deluxe will offer a number of ways to enjoy multiplayer, including online play with one or two local players sharing a split screen, play across a local wireless network, or up to 12 players on a wired LAN connection, provided you have additional Switch consoles and copies of the game. LAN play is a big deal for a Nintendo console, and something many Mario Kart 8 fans asked for. While there are no plans to bring this functionality to the Wii U, you'll be able to take advantage of it out of the box with the Switch (assuming you have some LAN cables and a hub handy).

Our multiplayer group consisted of five people spread across four Nintendo Switch consoles and four TVs. Four players had their own TVs and systems, while I shared a TV and Switch and played with a vertical split-screen experience. The actual LAN matches were rock solid and seamless, and creating or joining a lobby was a snap.

Oddly, to access LAN play you have to press a strange combination of buttons on the main menu screen (clearly Nintendo isn't expecting this to be a feature many players take advantage of). When two players are sharing a console they also run into some design compromises (as with any split-screen experience), and since only the first player on a system can trigger Mii chat lines Player 2 won't be able to engage in the delightful "I'm using tilt controls!" talk spam that was the hallmark of every multiplayer game I ever played on the original Mario Kart 8.

I used a mini wheel controller for my games of Mario Kart 8 Deluxe, a peripheral which will be releasing on the same day as the game. One of the Switch Joy-Cons slides into the center of the tiny wheel, which adds more prominent shoulder buttons (critical for a good Mario Kart experience). The wheel peripheral will presumably work with tilt controls as well, if you want to use those, but I didn't try that out because I actually wanted to be able to play well.

The other players in my group were each using a different control method, including just the Joy-Con itself, a Joy-Con in either hand, the Joy-Con Grip controller, and the Pro controller. It's hard to say which controller setup is best for Mario Kart 8 until I have a chance to try all the possibilities myself, but it's likely the larger, more robust controllers will offer a higher level of performance.

My time with Mario Kart 8 Deluxe flew by, and left me wanting more. While it's no surprise that the game was entertaining, since it's mostly the same great experience as Mario Kart 8 on the Wii U, being able to enjoy the game in a LAN environment added an extra layer of fun. Nintendo is likely right that relatively few players will ever really take advantage of the full power of LAN play, and coordinating a group of twelve players, along with the multiple systems and TVs required, won't be easy for most people to arrange...but those who do manage to do it will have an absolute blast.

Mario Kart 8 Deluxe will release for the Nintendo Switch on April 28. 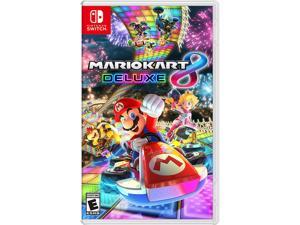 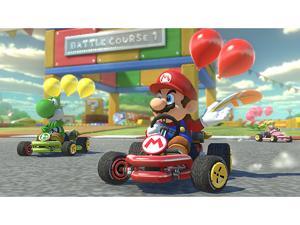 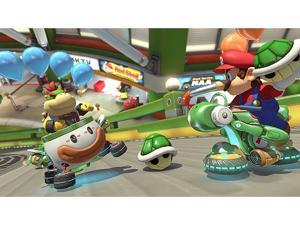 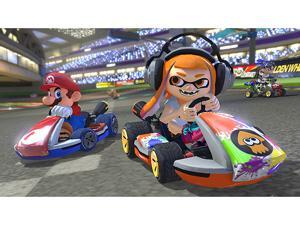 You can now play Mario Kart 8 with the Nintendo Labo

Preview: Mario Kart 8 Deluxe skimps on new content, but it's worth getting behind the wheel again

News
Feb 15, 2017
My first thought when seeing Mario Kart 8 Deluxe on Nintendo Switch was “this looks impressive.” Running at 1080p and 60fps on a massive main screen...

E-Sports
Nov 30, 2015
Mario Kart 8 is arguably the best game on the Nintendo Wii U and Nintendo is teaming up with Disney to capitalize on that popularity. On December 8,...