We've pretty much gotten our fill of great Star Wars games as of late, including Battlefront and Disney Infinity 3.0, complete with an add-on for The Force Awakens released last December. But there's always room for one more, it seems, and WB Games' latest entry in its ongoing Lego game series, Lego Star Wars: The Force Awakens, could easily be one of the best yet.

That's because the company stays true to the similar tone that worked so well for its previously released Lego Star Wars games, sticking with source material while adding little nods at humor that make it a treat for all ages. For instance, in this game, when Kylo Ren chats with the deteriorated skull of Darth Vader, he pauses when there's a knock at the door, and we get a look at his teenage boy-like room, complete with Star Wars posters. Of course, he still doesn't hesitate to trash the place when he learns BB-8 got away, but it's a humorous set-up nevertheless.

As before, the goal of Lego Star Wars is to get from point A to point B in a level, defeating enemies with stylish combos while, at the same time, building objects to help you get further ahead. While that may not sound like it strays too far from the formula we've come to expect from previous Lego games (including the best-selling Dimensions), there are a couple of neat twists this time around.

Unleash your creativity in an open world

The first new feature is the Multi-Build, a new system where you actually have possibilities in terms of what you can put together with Lego bits. You can choose what you wish to build and then hold the analog stick in that direction while holding down the button to get it together. Sometimes, you'll find that a certain object works better than the others, like a mouse-bot that can distract a large Luggabeast (the one the guy's riding while he captures BB-8 in the beginning) and enable you to continue on your way. If you somehow guess wrong, not to worry – you can simply start over and build the right thing.

Another huge aspect to the game is its open-world flight. Although WB didn't quite detail how many levels like these would be in the game, the opening one featuring the Millennium Falcon is a delight, as we flew around the desert planet of Jakku, obliterating TIE Fighters and taking quick solace inside a Star Destroyer, avoiding walls and enemy gunfire. It's pretty much just like the film, but with nice little touches to remind you that you're in Lego-land.

The gameplay is still just as good as you'd find in other Lego games, with responsive combat controls (Rey's attack moves are terrific here) and great character switching. The second level we tried out, taking place inside a Star Destroyer, made fine use of this mechanic, as you switched off between Rey and BB-8, solving puzzles throughout the ship to get to the exit on the other end. It's still a fun dynamic, even after all these years.

The level design is also strikingly good, featuring atmospheric touches taken straight from the film – but with a few minor additions to fit into the Lego universe. For instance, instead of simply sliding down a hillside as she did in the film, Rey actually goes "sand surfing" for a few seconds through an obstacle-laden track, where she can pick up extra Lego bits along the way by coming off ramps at just the right time.

The three level demo we tried out came to an end all too soon, leaving us wondering what other exciting moments we'd come across in the full release. How will it treat the face-off between Han Solo and Kylo Ren? What about the epic space battle across the surface of the Starkiller? And, hey, will we get a chance to play bearded Luke alongside an older Leia in two-player co-op? These questions, more than likely, will have to wait to be answered until the game releases on June 28.

For the time being, it's safe to say that the Force is definitely strong with this one. Even with Disney Infinity doing its thing and all.

Check out the gameplay below to see more of Lego Star Wars in action! 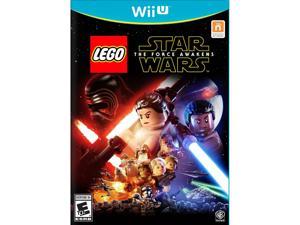 News
Aug 09, 2016
TT Games has released a free level pack for Lego Star Wars: The Force Awakens which tells a new story set before the events of the film and which...