Every indie game shown off during the 2019 Gamescom Nintendo Direct

Every few months, Nintendo releases a video showing off new and upcoming indie games headed to its platforms. The most recent of these, at Gamescom, lasted about 24 minutes and showed off a whopping 29 games headed for the Switch over the next six months.

Gearbox and Hopoo Games team up to present this third-person shooter roguelike, which allows up to four players to explore and face monsters cooperatively. Risk of Rain 2 launched on PC in March 2019, and now, it’s making the jump to the Switch. More info is expected to follow during PAX West.

We’ve already written a bit about this beautiful, Zelda-inspired post-apocalyptic adventure game. Instead of a fantasy swords-and-sorcery setting, Eastward features a hobo armed with a frying pan, and teams him with a young girl who has psychoelectric abilities. Chucklefish and Pixpil will bring Eastward to the Switch sometime in 2020.

Wide Right Interactive is responsible for this hand-drawn shoot-‘em-up which appears to be inspired by Gradius and R-Type. Freedom Finger features an impressive voice cast, and an equally impressive soundtrack. Gameplay involves avoiding enemy fire while using your hand-shaped ship to grab enemies, which changes your attacks and firing patterns. You can also throw captured ships at other enemies or bosses (or just flip them the bird) when Freedom Finger releases in Fall of 2019.

Röki was first revealed in 2017 by Polygon Treehouse. Several sites were granted artwork and details of the game, including the information that it’s an adventure point-and-click game, but it’s been in a sort of limbo since then. It appears that the limbo didn’t last, though, as according to the Nintendo Direct, it’s almost ready to rock.

Several former Diablo II developers were involved with this isometric lootfest, and it shows. Torchlight II has been available on PC for several years now, but it’s finally coming to consoles September 3. The Switch version will feature local cooperative play, ad-hoc multiplayer, and will include a pink unicorn pet as a Switch exclusive. Torchlight II offers a crunchier role-playing experience on PC than competitor Diablo III, so it’ll be interesting to see how Perfect World Entertainment, Panic Button, and Runic Games adapt the game for consoles.

There hasn’t been a new Tony Hawk or SKATE game in quite a while, but Skater XL looks like it might fill the void. It’s been available on the PC since December last year through early access, and you can expect a full release sometime in 2020. Easy Day Studios focused heavily on perfecting the game’s mechanics, and the trailer touts realistic physics and a high degree of board control.

Developer Frecle brings us this gravity-defying puzzle platformer, which sees you controlling a large-headed character through a 3D world. It appears to be at least partially inspired by the works of M.C. Escher, though the player can also use graffiti to remake the world in their own image. Expect Youropa in Winter 2019.

Superhot has been ported to many different platforms since its first debut in 2016, but the release on Switch marks the first time it’s been available on a portable system. Superhot’s unique combat mechanic means enemies don’t move until you do, and gives its first-person action sequences a more tactical, thoughtful feel than you might be expecting. This one became available on Switch immediately following the presentation.

Chromatic Games’ original hybrid of tower defense and third-person combat will soon be revisited with this remake of the very first Dungeon Defenders. The remake is a Switch exclusive, features four-player split-screen cooperative play, and will be available in February 2020.

From developer Shin’en, The Touryst is a voxel based puzzle platformer which will see your blocky protagonist exploring a resort island and trying to solve an ancient mystery. The trailer reminded me strongly of the classic NES game StarTropics, but we’ll have to wait until November 2019 to see if there’s any connection.

Speaking of unique visuals, Skellboy combines 2D art with 3D gameplay to give it a style all its own. There’s a focus on acquiring body parts and attaching them to your undead frame, and the combat looks fast and silly. Fabraz Umaiki Games is responsible for Skellboy, which is scheduled to release on December 3, 2019.

From Cleaversoft, this hand-painted, fast-paced platforming game introduces us to a world where Dragons have conquered the Earth. Fortunately, their snakelike bodies provide some neat platforming opportunities. Expect EarthNight to release late in 2019.

Containing both of Dennation Games’ brutal top-down action titles, the Hotline Miami Collection released immediately following Nintendo’s presentation. Even if you’re not a fan of the ultraviolence on display, there’s no denying these games have fantastic soundtracks.

The presentation changed to a more rapid-fire pace at this point, giving only a few seconds to each game on display.

This gothic 2D platformer comes to us from The Game Kitchen and Team 17 Digital. There appears to be a fair amount of Dark Souls and Castlevania influencing the gameplay, which doesn’t shy away from depicting the main character messily being torn limb from limb by a gigantic baby. Despite the date of September 26 provided in the video, this game will launch on all platforms on September 10, 2019.

Close to the Sun

Clearly inspired by games like BioShock, Wired Productions and Storm in a Teacup’s debut will allow players to explore the city ship Helios, founded by übergenius Nikola Tesla. This horror adventure is an Epic store exclusive on PC, so the Switch port may attract players looking to play the game elsewhere.

This cute RPG allows for solo or cooperative play with a partner. PQube Limited and The Gentlebros will be bringing this game to the Switch in Fall 2019.

From Thunder Lotus, this hand-drawn 2D game looks like it incorporates some powerful themes involving death and transition. It will be available for Switch sometime in Spring of 2020.

Modus Games and Frozenbyte present this continuation of the Trine storyline. Once again, the Wizard, Knight, and Rogue who have been combined in a single body must use all their skills to overcome physics-based platforming challenges. The sequel features up to four-player cooperative play, and will release on October 8, 2019.

Creature in the Well

Flight School Studio is working on this intriguing combination of a pinball game and a bullet hell action adventure. We won’t have to wait too much longer for Creature in the Well, as it releases September 6, 2019.

Silver Dollar Games is preparing the Switch version of this Kung-fu brawler for December 2, 2019. You play as a stick figure pitted against hordes of enemies, and the background punctuates heavy attacks with freight trains, demons, or cute ninja girls depending on what sort of moves you’re unleashing.

Set for release on Valentine’s Day 2020, this title combines caring for a cute Shiba Inu pup named Cheeseball with elements of a relationship simulator. Taking the dog for a walk will introduce you to other NPCs you can form connections with.

PHOGS! stars a two-headed dachshund which uses its floppy body to move around a 3d environment. Coatsink and Bit Loom Games are still working on this title, set to release in early 2020.

Part minigolf, part fever dream, this silly physics-based title allows anything, including cats, office chairs, and even the player to be the ball. Triband advertises What the Golf?  as a golf game for people who don’t like golf. Expect to see it in Winter of 2019.

Very little time was devoted to this cel-shaded, grid-based puzzle game from Chump Squad and Gwen Frey. That’s too bad, because the gameplay looks pretty interesting, giving you control of a set of sentient instruments who have to make their way through puzzle stages. Kine isn’t too far off, and should release before the end of the year.

This first-person tower defense game featuring plastic toys should be interesting for fans of the Toy Story franchise, or anyone who enjoyed the Army Men series of real-time strategy games back in the early 2000s. The game’s been available on PC in early access since 2017, where it’s very well regarded.

Speaking of Real-time Strategy, Northgard is the latest in the genre to try to make the jump to consoles. From Shiro Games, this Viking-inspired battler shows units facing off against a 4-winged dragon demon, an ice troll, and various elemental enemies. Expect it to come out on September 26, 2019.

A gorgeous Zelda-inspired steampunk action-adventure game with some light procedural elements, Sparklite is a title I’ve been watching closely since I got to try it out last year. Merge Games and Red Blue Games team up to bring this one to Switch in Fall 2019. 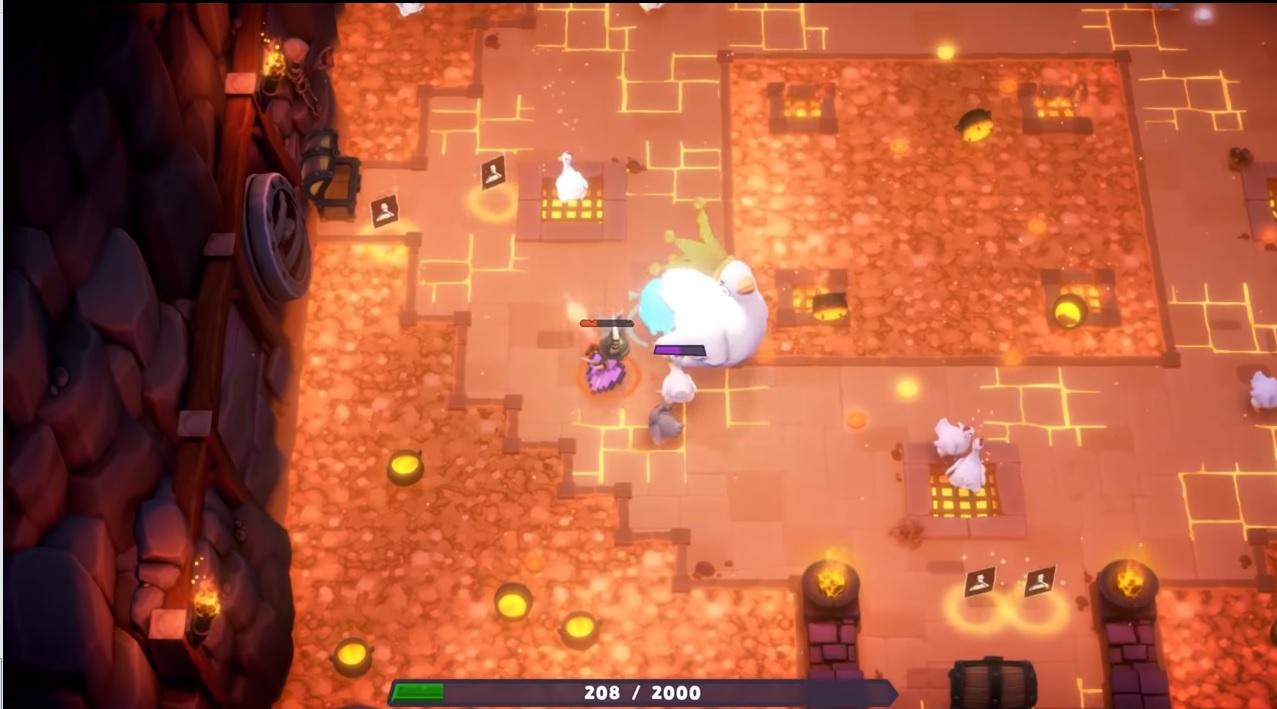 Based on the popular Steve Jackson card game, this dungeon brawler takes some inspiration from Gauntlet but also includes some card-based powerups. No trailer was available at the time this article was published, but it looks like Munchkin: QQ  will feature co-op multiplayer and have some RPG elements. From Asmodee Digital and Lucky Hammer, this one should release in Fall 2019.

Unquestionably one of the best-looking Metroid-style games ever made, the final title shown during the presentation was Xbox game studios’ Ori and the Blind Forest: Definitive Edition. The latest Xbox exclusive to cross over to the Switch, Moon games will be bringing the pretty platformer to Nintendo’s console on September 27, 2019.

News
Mar 18, 2020
Nintendo had a new Nintendo Direct today, and the subject was indie games. Around this time of the year they always have an indie showcase ready for...

SNES games that need to be added to Nintendo Online yesterday

News
Oct 14, 2019
Nintendo has finally added SNES games to its Nintendo Online games on demand service. While we got some amazing titles, the current list is a little...

News
Oct 04, 2019
Games, games, and more games. That's what Nintendo has in store for fall 2019, and the gaming giant invited us to an office in Los Angeles this week...