Disintegration: How to win in both single-player and multiplayer

V1 Interactive’s new sci-fi shooter game Disintegration attempts to distinguish itself by smashing the FPS and RTS genres together into a more or less cohesive experience, but as noted in our review, it doesn’t always fire on all cylinders. Still, its unique gameplay premise is one that begs to be mastered by those with an eye for stratagem and a steady shooting hand, so we figured we’d offer some advice gleaned from our playthrough.

Below we include helpful tips and strategies for excelling in both Disintegration’s single-player story campaign and competitive multiplayer component.  Getting totally comfortable with the game’s unique gravcycle-based movement and combat can take some time, but the advice offered should at least smooth out some of its more tricky bits.

Before each story campaign mission, you’ll find yourself in a large hub area where you can chat with your squadmates and other friendly NPC’s. You should make sure to talk with as many of these friendly characters as you can since they not only have some colorful banter, they can also give you optional challenges to complete during the upcoming mission.

These challenges are usually pretty straightforward, involving objectives such as healing your squadmates a certain number of times or killing a certain number of enemies with a specific squadmate ability. Whenever possible, you should put in the extra effort to complete these challenges since they grant tangible rewards such as Salvage caches and even upgrade chips upon completion.

It’s a little annoying that you have to first go through the rote routine of manually obtaining the challenges from friendly NPC’s before each new mission and then complete the oftentimes grindy challenges themselves. However, if you want to keep efficiently leveling up and unlocking upgrades for your gravcycle and squadmates, it’s a system you can’t just ignore, especially if you’re hoping to tackle Disintegration’s more challenging difficulty levels.

If you’re more of an FPS fan, it can admittedly be hard to even remember that your squadmates are capable of focusing their fire on a single enemy and deploying unique abilities like concussion grenades and artillery strikes. If you want to efficiently defeat Disintegration’s more advanced adversaries, though, you’ll need to strike a careful balance between direct engagement and using your squadmates to set up clever counter-plays.

Taking a second to familiarize yourself with the specific squadmate abilities you have access to during a particular mission can help you handle that mission’s unique opposition. For example, the brutish Rhino units that will try to batter your squadmates around in melee combat can be stopped in their tracks with a concussion grenade or corralled with a well-timed slowing field.

Hitting enemies with certain squadmate abilities and/or shooting them in the right spot will also put them into a “stagger” state where they’ll flash yellow. Staggered enemies take more damage from all sources so be sure to hit them hard not only with your gravcycle’s weapons but also with a focused fire order for your squadmates. Even the burliest of enemies can’t weather a full-on assault when they’re in a staggered state.

Conversely, if any of your squadmates have their health reduced to zero, you should try to swoop in and retrieve their ‘brain can’ as quickly as you can. Failing to recover a fallen squadmate’s brain can within a certain time period results in mission failure, and the sooner you recover it, the sooner that squadmate will auto-revive and rejoin the fight.

Your gravcycle’s scanning function is certainly helpful when it comes to spotting objectives and (when appropriate) ordering your squadmates to interact with said objectives. The scanning function can also help you prep for upcoming combat encounters by getting a read on enemies and usable objects from afar. Not only will you know what sort of opposition to expect, you’ll also know where explosive items like red barrels and power cells are placed, affording you another powerful weapon to exploit once the action starts.

Make sure you also keep an eye out for the red-armored Merc Elite ground units during each combat encounter. When killed, Merc Elites drop a temporary AoE healing field that can heal both you and your squadmates. These healing fields can be a real godsend during tough fights, especially if there aren’t any healing stations nearby and/or you’re playing a mission where you don’t have a healing auxiliary weapon as part of your loadout.

Taking Down the Toughies

There’s a decent amount of enemy variety in Disintegration, and some of the more advanced enemy types can really ruin your day if left unchecked. However, as with any AI-controlled enemy in an FPS game, every threat you encounter, be it a Rhino, a Sniper, a Merc Elite, or the dreaded Thunderer robot, has a weakness you can exploit.

Advanced enemies will often dodge and/or brace against your attacks, so you’ve got to get a little creative in how you deal with them. Snipers, for example, naturally prefer long-range engagement but hit them with a slowing field and their shots become a lot easier to avoid. Even better, an artillery strike or concussion grenade can force them out of their cover to reposition, giving you time to move in for the kill.

Thunderers, meanwhile, actually require a bit of a multi-step process to take down. It’s not enough to just empty a Thunderer’s health pool, you have to also circle around and destroy the four circular power cores on the robot’s lower back which become exposed when its health has run out. After a few seconds, the Thunderer will recover and gain all its health back, forcing you to redo the process of draining its health so you can expose the cores again until all four are destroyed.

Playing in the Sandbox

Before you dive into the full multiplayer experience, you should consider first visiting the ‘Multiplayer Sandbox’ portion of Disintegration’s training mode. The Multiplayer Sandbox lets you see the individual performance stats and unique loadouts for each of the game’s multiplayer crews (more on those in a moment). It also affords you an opportunity to see in action the subtle ways in which the multiplayer gameplay differs from story campaign gameplay (there is no slo-mo for deploying squadmate abilities, for example).

The Crew That’s Right For You

Disintegration’s multiplayer features nine different playable crews, each with its own visual style and pre-set loadout of gravcycle weaponry and squadmate abilities. These pre-set loadouts make certain crews better suited for specific playstyles and game modes, but there’s nothing stopping you from picking a favorite and sticking with it regardless of what mode you’re in.

Whenever you’re killed during a multiplayer match, you can actually swap out your current crew for another one. This means that uber-competitive players who take the time to learn each crew’s strengths and weaknesses will be at a distinct advantage since they’ll always know which crew is best in a given situation. A well-timed crew switch-up can help you swing the tide in your favor during a losing match, or at the very least keep enemy players on their toes.

Working On Your Ground Game

Gravcycle on gravcycle combat is a major component of Disintegration’s multiplayer, but I’d argue it’s not the most important one. That honor goes to the proper care and management of your squadmates on the ground, since it’s through them that true victory is often decided.

In the Zone Control and Retrieval game modes, your squadmates are key since they’re the only ones that can physically complete objectives (capturing points in Zone Control, delivering cores in Retrieval). Even in the Collector mode which functions more like a traditional team deathmatch, properly utilizing your ground-based squadmates and their abilities to trigger flanking attacks, ambushes, and defensive stonewalls can help give your team an insurmountable advantage.

Suffice it to say, it can be tempting to only focus on eliminating enemy players in their gravcycles, but targeting enemy squadmates (and, more importantly, keeping your own squadmates alive) can be just as much of a deciding factor when it comes to consistently winning.

Up to the Challenge

The most efficient method for earning credits in multiplayer is by completing challenges, and in Disintegration’s multiplayer there are two categories of challenges to work on: general and crew-specific. General challenges can be progressed no matter which crew or game mode you prefer, and they cover standard short-term and long-term objectives like earning score, winning matches, and hitting enemies with specific squadmate abilities.

The crew-specific challenges focus a bit more on short-term rewards than the general challenges, but both categories also properly reward players who are willing to invest over the long haul. Every completed challenge awards credits and some even include unique bonus unlocks such as profile badge emblems or banners.

Disintegration launches for PC, Xbox One, and PS4 on June 16. 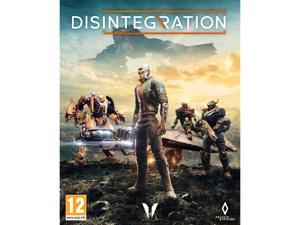 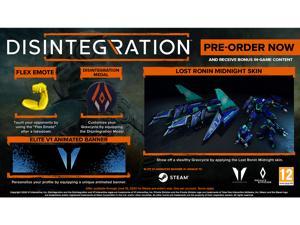 News
Jun 15, 2020
While V1 Interactive’s new FPS/RTS hybrid game Disintegration doesn’t quite hold up as a complete package , it still offers a fair amount of long-...

News
May 07, 2020
After a successful public multiplayer beta test earlier this year , the folks at Private Division and V1 Interactive have announced Disintegration ,...

News
Jan 30, 2020
When it isn’t being romantic about motorcycles , Disintegration, developed by V1 Interactive, offers an innovative, promising take on the FPS genre...