With the announcement of Xbox Series X and S launching on November 10, Ubisoft went ahead and announced Assassin’s Creed Valhalla, will also launch on November 10 as a launch title for the new console and also on Xbox One, PlayStation 4, PC, and Stadia. The game was originally slated to drop on November 17.

“We are excited to announce that players will be able to discover Assassin’s Creed Valhalla sooner than expected!” said Julien Laferrière, Producer on Assassin’s Creed Valhalla in a statement. “We cannot wait to see the world we’ve been creating over the past 3 years coming to life on all platforms, including on the next generation of consoles with the Xbox Series X | S on November 10.”

Ubisoft also announced Watch Dogs: Legion will also be a launch title for Xbox Series X and S on November 10, but will be released on October 29 for Xbox One, PlayStation 4, PC, and Stadia.

Both games will be part of Xbox’s Smart Delivery Program where if you buy the game for a current-generation console, you will be able to get the new generation console version of the game along with bringing your saved games to the new version. 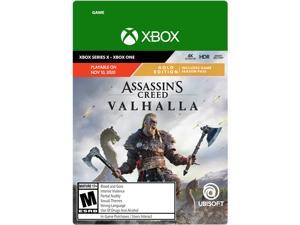