Assassin’s Creed Odyssey: Engravings, how to use them to make the best gear for you

Engravings are a unique new system to roll out for Assassin’s Creed Odyssey that are meant to go hand-in-hand with the unique playstyles available to a player exploring Ubisoft’s Greek world. These engravings are both collectible and reusable but follow a very specific set of rules that make them one of the most confusing mechanics in Odyssey.

So, let’s talk about engravings, how to find them, and more importantly how you can use them to take your gear to the next level.

The rules of the trade

It’s important to understand a few things about how gear works in Assassin’s Creed Odyssey before you dive into engraving. The good news is, engraving an item is relatively cheap, even for high tier effects, which encourages you to experiment to find the effects that work well for you. Unfortunately, on the flipside you won’t be able to just plug and play your engravings and immediately expect to get the best effect.

You can only have one engraving and one type of stat boost effect on any given piece of gear, which includes any boosts that come with the gear as a normal effect and not all engravings will apply to every piece of equipment. So a chest piece with a natural plus 14% ranged damage effect can’t be equipped with a plus 10% ranged engraving to further increase ranged damage. The option to engrave the gear with that effect in this case won’t even show up in the menu.

What’s more, the effects of stat engravings are usually less powerful than the maximum effect of a piece of gear that naturally spawns with that effect.

This means that stat engravings are never meant to enhance a primary stat and are most effective at enhancing a secondary stat for a non-primary playstyle. For example, if you specialize in assassination damage and attacks, you’ll always want to choose gear that has assassination damage as a base attribute because the upper threshold for that effect can get as high as 15% on legendary gear, whereas the max effect of the assassination engraving is 10%.

As a result, your engravings will almost always be centered around your secondary combat style rather than on the damage you plan to use the most. An assassin that isn’t afraid to get his hands dirty in combat will benefit the most from engravings that increase warrior damage or a specific weapon damage, because their gear should already have a greater assassination bonus than what’s available from an engraving.

That said, there are a lot of different engravings available across Odyssey and there are effects that are sometimes way more valuable than a single stat boost engraving. For example, a legendary engraving that reduces your adrenaline Overpower cost by one is going to be of a lot more benefit to an open combat specialist than any amount of assassination damage.

It’s also important to note that legendary engravings don’t stack their effects. So even if you equip two pieces of gear that reduce the adrenaline cost of your Overpower attack it’ll never become more than a minus one to the overall cost. The same goes for any and all legendary engravings, so you need to be careful about which legendary engravings you apply so you’re never wasting a slot with a placebo that isn’t actively increasing your damage.

Now that you understand how engravings work, we can talk about how to find engravings out in the Greek world.

Engravings are the subtle reward for almost everything you do in Assassin’s Creed Odyssey and can drastically range in power and effect. You can get engravings for completing challenges, performing impressive feats of strength or heroism, or by looting them after solving one of the riddles of the Ainigmata Ostraka spread across the map.

Legendary engravings start out at the maximum possible strength they can be, and you can usually only get your hands on them for completing specific feats like killing the minotaur or completing a significant quest.

In contrast, non-legendary engravings start at tier one and go up to tier five based on how many times you’ve accomplished the unlock objectives. These objectives can be as simple as hitting a significant milestone in kills with a weapon type or they can be as complex as solving five very specific Ainigmata Ostraka riddles related to that effect.

So for example, if you want to unlock the final tier of an engraving you’ll need to complete all five of the unlock objectives, and for every objective you complete the engraving will grow slightly more powerful until it reaches its final tier. The rank of your engraving is represented by the small diamond shaped marks on the left side of the icon, but generally they range in power from a 3-25% increase in the effectiveness of an ability, weapon, or damage type.

You get all of your base stat engravings just by making it to level 50, which includes bonuses to assassination, warrior, and ranged damage, as well as health, armor, crit chance, crit damage, elemental effects and headshot damage.

You also get several more specialized engravings by completing the challenges associated with certain weapons and attacks. So, as you kill enemies with your bow you’ll steadily complete a challenge associated with bow kills, and after you complete all five you’ll unlock the final tier of an engraving that boosts your effectiveness with a bow related stat. The same goes for dagger kills, killing enemies without getting hit, killing specific enemy types and so on.

There are a lot of specific effects and you’ll probably unlock many of the engravings associated with your playstyle just by doing things that come naturally. A ranged specialist is going to be killing so many enemies with bow related skills that they’ll blow past the challenges associated with them in no time, and the same goes for someone that prefers daggers or heavy weapons. When in doubt, if you want to unlock an engraving associated with a weapon or a damage type you’re going to want to focus on using that weapon or damage type as much as possible.

Once you’ve unlocked the first tier of an engraving you can also view your progress towards a related challenge under the engravings section of your inventory and also see light information about engravings you still need to unlock.

Understanding how to properly spec your character means investing in a specific playstyle for a set of gear. You can theoretically engrave multiple sets of gear for different playstyles but knowing how you like to play will always help you figure out how you should engrave your gear.

As we mentioned earlier, it’s best to think of your spec like you have one primary stat, one secondary stat, and a third stat that you might use but much more rarely than the other two. This might be a character that prefers melee combat but isn’t afraid to stab someone in stealth before the combat kicks off, or an archer that wants to pick enemies off from a distance before moving in for a stealthy round of knifework to clean up a camp. Either way, you need to know how you plan to play so you can specialize accordingly.

The basic setup is entirely focused on increasing your secondary stats. Your gear’s base abilities should cover whatever damage output you prefer while your engravings should boost the damage of your secondary effects. In the case of the example below, I’m focusing on melee combat, so I have the immortal set equipped which has a base 15% bonus to warrior damage on every piece of equipment. At the same time, I’m a huge fan of assassinations and the hero strike ability so I have a plus 10% assassin damage effect on all the other pieces of my gear. This lets me maximize my ability to function in stealth and in melee combat.

A more advanced setup might be a series of engravings focused entirely on melee combat, in which case you would again start from your base warrior damage bonus on all your gear, and then focus on engravings that fit your favorite weapon type. You can equip weapon damage bonuses to both your head and both your weapons and they seem to function as a stacking stat boost across the board. So, using an engraving with a 15% damage bonus to daggers on your head, and on both weapons will theoretically result in a plus 45% bonus to damage with daggers across the board.

This mentality focuses on selecting engravings that match your playstyle and then maximizing where you can place them in your loadout. Not all engravings can be equipped on every piece of gear, but it’s not always clear which can go where. When in doubt you can sort your engravings based on specific armor types through the engravings menu in your inventory.

It takes some time to figure out what engravings work for you, but once you figure it out enemies quickly stop feeling like damage sponges and start to go down much faster because you’re actively kitted for the kind of gameplay you prefer. 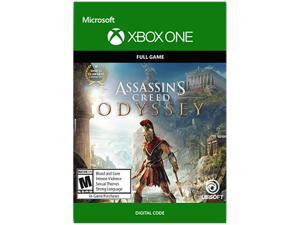 News
Nov 27, 2018
The first major post-launch DLC for Assassin’s Creed Odyssey is arriving on December 4 in the form of a three episode story arc called Legacy of the...

Assassin’s Creed Odyssey: How to make the Mercenary system work for you

News
Oct 10, 2018
Mercenaries in Assassin’s Creed Odyssey are simultaneously a constant thorn in your side and one of the coolest new systems to roll out for Ubisoft’s...